A man. A woman. Trapped in a lift. What happens next? The audience will decide... 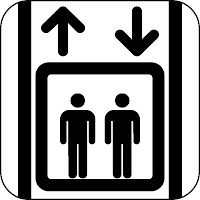 It's not often I get the pleasure of watching theatre productions (at the moment, anyway!); so when my friend Kate Nieland asked me along to watch a preview of the show she's in, as part of a test audience held at The Bush Theatre, I jumped at the chance! As the title of this blog suggests (*the show's own teaser) - this piece of drama takes the our lead, as an audience... I was intrigued!

To explain, when I was little, I used to read a series of books, where at the end of each chapter, you (as the reader, and protagonist) would choose what would happen next... Pick up the stick in front of you? Head to page 23... Talk to the dog with a stick in its mouth..? Head to page 40. And so on... I remembered feeling rather annoyed at myself for choosing the wrong path, and trying to work back on my steps to make the story end well..! At any rate, I was impressed by the thought of a cast who were willing to follow our lead; ready to deliver an ending that suited our whim... and I was also intrigued to see how they would make it happen, logistically-speaking.

I have to say, writing a review for an original theatre production which hinges on suspense is not easy... for a start, I can't make sweeping statements you'll recognise about the characters, like "Hendry played Shylock with a knowing flare, making us all wary of his manipulative skills..," because you don't know the characters... obviously! And if the story is all about not knowing what will happen next, then I can't say "yeah, the bit where the tree falls on the male lead is a shocker - you'll never see that one coming..!"... again, obvious. But what I can comment on, is the acting.

Both leads were extremely natural. This is not a stylised piece, they are supposed to be relatable; and they both achieved this, perfectly. Rachel (played by Kate) is someone we've all met and known at some point in our lives; chatty, down-to-earth - and more than a little flirtatious. The other actor played by Henry Douthwaite goes by the name of 'Man', and is a reserved English gent who shows the odd glimmer of a mischievous side. There's comedy between the odd pair; as she deals with the situation by over talking, and he, conversely, clams up. I really enjoyed the well-observed idiosyncrasies that made their way into the story; her loud eating, his quietly exasperated responses. Given more time, I would have asked the writer, Jason Hewitt, how much of the script came through improvised sessions, and how much came from his imagination. There were certainly no jarring moments where we were aware of the 'dialogue', which can so often be the case in naturalistic pieces.

What I will say about the play, without seeing the script itself, is that Jason's previous life as an actor (that is not to say he has retired, just to say it pre-dates his career as a writer!) - is an obvious advantage to the writing process. Sometimes you can feel the ego of the playwright seeping through, you can hear them willing you to feel their wisdom and wit, writing lengthy monologues just to cement their authority as a gifted writer. This was not the case with Claustrophia - it almost felt, at times, like the writer was giving the actors as many opportunities to shine as possible! In fact, I did ask Jason if he has considered starring as the leading male himself, his words were "I wasn't right for the part..."; and if you know anything about actors, you'll know most of them do not have the humility to say that. So, without ego - and with a strong sense of what makes a great role, Jason Hewitt delivers a play that is likely going to be found in actor's monologue audition books in years to come.


So! Back to the play itself... Without giving too much away (because that would ruin it);

the story goes that two strangers are forced to share the small confines of a lift, waiting for rescue, whilst enduring the ramifications of claustrophobia in the process. At the end of the first half, as we are plunged into darkness with a scream (from the actress, not me - you'll be pleased to know); we are then offered choices as to what will happen to the characters in the 2nd half... On a table near to the stage we were offered six cups to put our voting chip into... The cups all sat alongside a prop (including a bag of boiled sweets, a tie, a newspaper cutting, a briefcase with some documents sticking out); and as quickly as we voted, the chips were tallied up, and the show continued.

It's an obvious compliment to the pair that, when the second half started, they were still able to inject well-developed personas into an act that was not entirely off book. And even though they had their scripts with them - they were not heavily relied upon. As Director Sharon Burrell explained later, to have all the various endings memorised would have meant weeks of extra rehearsals; and there was a real feeling of wanting feedback before the production continues in it's development.

Sharon asked, softly, if I had ever experienced any form of claustrophobia, just before we were led in to watch the show... I'm pleased to report that the show itself didn't fill me with fear... although... for anyone who's ever watched a production, and known one of the actors playing the part of someone in distress, you'll know how hard it is... I was fighting the urge to comfort Kate, it was a slightly uncomfortable feeling I had to sit on, throughout the performance! I will say this; as an audience member, you are not terrified for your own safety. It brought to mind when I studied Brecht; he intended for his theatre to be 'knowing' - the audience were not supposed to be 'asleep', they were meant to be completely aware of everything, and were actively encouraged to mentally dissect the production. He achieved this in various ways, by not bringing the lights down in the auditorium, and sometimes having the audience referred to during the play itself. Although we weren't referred to, we were sat in the same space - and light - as the actors, and it made me wonder if I'd have felt differently had there been a singular stream of light squarely falling on the 'lift', and leaving us out of it.

I feel rather ill-equipped to make any comment about the direction of the play (having not been privy to the rehearsal process), but just taking a look at Sharon Burrell's credentials will tell you she has a knack for taking a concept and turning it into a riveting reality; therefore some of the credit must go to her! The great thing about opening the play up to comment and review, in the early stages, is that Sharon has a clearer idea of what the audience made of her efforts - what was understood, and what (if anything) went unnoticed. Again, a lack of ego like that in the creative process is a massive bonus. (in my opinion!)


I watched two possible second halves to the play, at end of the entire process we were asked to complete a feedback form, and I hoped what I was writing could prove to be of some use... It occurred to me, I've been that consumed by other projects since I left college (stand-up comedy being one of them) that theatre's had to take a back seat. And it's such a shame. Claustrophobia reminded me of how much raw talent there is out there; in terms of writing, directing, and acting - and how enjoyable a matinee can be, when the world's still rushing around at breakneck speed outside the door.


In conclusion; I really hope Claustrophobia gets the funding, 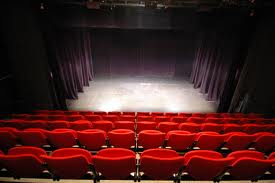 support, and plaudits it deserves! If you get chance to go & see it, do! And let me know which ending you get to see... having seen two of the possible outcomes, I'd LOVE to know what the others involve...

The sound track for this blog post..? Love In An Elevator! Is it appropriate? NO! But you know what I'm like for giving a Reader Soundtrack... FYI, Claustrophobia is NOT a kitsch love story, unlike Aerosmith's track... (look at his face when he meets the hot chick in the lift!!) that's why I've left it to the end... having said that, it could be that one of the possible outcomes IS that it's a love story. If you ever watch it, and find out that is the case... let me know!
Labels: Bush Theatre Claustrophobia Drama Henry Douthwaite Jason Hewitt Kate Nieland London musings reviews Sharon Burrell theatre