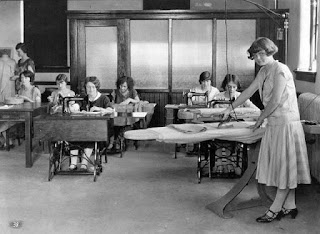 This may be obvious to you, but it occurred to me only recently that all seamstresses are not made equal; or, more importantly, not all sewers have the same predilections... It's the same with cooks (for example), one will have a penchant for making sweet pastries, another for hearty European cuisine... In the sewing sense, just because you're great at putting a pattern together, you may not be particularly good at making alterations, or customising clothes you already own, for example.

And that's what I really love - making utterly unique garments, from clothing that was once something else...(or a curtain, like my Laurel effort). Don't get me wrong, the Great British Sewing Bee had me dreaming of taking a sabbatical, enrolling on a professional tailoring course, and recreating those achingly sharp lines, beautiful seams, and fabric that hangs perfectly from every angle; the likes of which you see on Savile Row. Of-course I would LOVE to have that sort of training, and talent. But, there's also something to be said for the ability to look at a ready-made garment, and transform it - in such a way that is both aspirational (style-wise) and wearable. Customising is an art in it's own right - and there's a bit of a divide when you look at dressmaking & crafting blogs, between those who sew by the pattern, and those who sew 'to the beat of their own drum'. 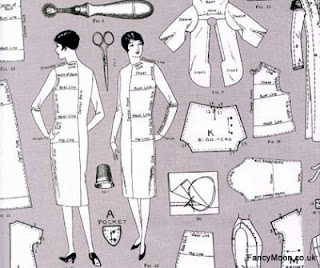 I do think, even though this might sound like I'm contradicting myself, that a strong knowledge in dressmaking (the basics) is essential to making anything, whether by the pattern, or from your imagination. It's a bit like wanting to paint like Rembrandt; you still have to start, when you first try, by colouring-in, inside the lines, before you can progress to being an impressionist.

That said, I have done a fair few courses in dressmaking over the years, and there's a whole host of Youtube tutorials just waiting to help... so I thought I'd go crazy and pick a few items of clothing from my wardrobe that are now for the chopping cutting board... I'll tell you what I liked about the item originally; why I've gone off it - and what I'm hoping to do with it (unless I'm hoping to be struck by inspiration in the interim)!

*Here's my recommended Blog Post Soundtrack for while you read this... if you're wondering how this music relates to this article - it's what I'm hoping to achieve, injecting a bit of Freak, C'est Chic, into my old clothes!

In no particular order then... *gulp* 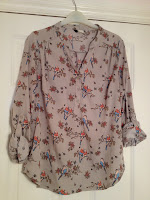 Here's a long sleeved polyester blouse that I bought it for work, and it's pretty inoffensive... especially for TV (no stripes, no fussy patterns - so therefore no strobing), AND it works well with lots of other separates. But... it's so... BORING. I mean, it has no personality!

But instead of sending it to the local charity shop like I normally would, as I'm still in love with the birdy print, this is getting the upcycling treatment... I think I'll just make it something a little more stylish; a little more fitted, maybe even a little more 'now'... 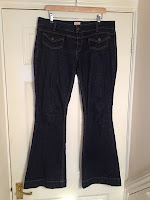 ...a pair of jeans; nothing wrong with them particularly, apart from the fact they're just as wide as they are long, and go baggy after just one wear. So they'll be a skirt before the end of the summer. Hopefully. 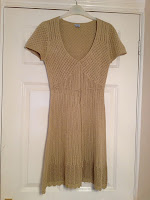 A gold dress. Or is it a long top? Gold's glamorous, isn't it? Or is it a strange choice for a crocheted number..? And a drawstring waist makes it flattering doesn't it? Or is it just a pain in the ass when it keeps on untying itself, and trying to work it's way free from the dress loops? Ah, you funny old dichotomy, you. I can't work out whether you're worth fighting for or not.

But... in the end... I view the choice to customise this dress in much the same way I viewed Rod when I first saw him in Battersea Dogs' Home. I can see something beautiful hidden in there; although other people may see a long hard road ahead, filled with challenges, I see an opportunity to take on an incredible journey, with an amazing companion, that will make it more than worth my while... There's no doubt I was right about Rod.

But I'm not holding my breath with this gold number. 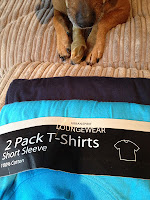 A pack of t-shirts.
Granted they haven't had a chance to do anything wrong yet (!) but I'm yawning before I've even opened the packet. Enough said.
Even Rod was that bored he brought a snack into shot to jazz it up a little.

However, they were incredibly cheap (the t-shirts, not Rod's snacks), so this is an inexpensive experiment, if nothing else!

As to what they'll be in the end? Well I'll have to do something pretty risky; no point AT ALL in playing it safe with a pair of t-shirts. I might just take on The Spice Girls, and see what happens when 2 Become 1... 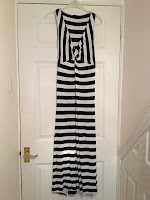 ...black and white stripy dress;
great when I first bought it, then I quickly realised there's only so many times you can wear something like this before people are like "Oh yeah, I loved that dress when you first wore it at Pete's barbeque in 2006. And that garden fete last year. Great dress that... Oh yeah, didn't you have that on at Suz's engagement do?"

Obviously, whatever I end up doing with this will be equally recognisable after a while because of the stripes; but I'm still getting two dresses for the price of one, in my addled mind...


then there's the polar opposite...

...the long black dress...
Not glaringly different or fashion-forward; just a wardrobe staple. 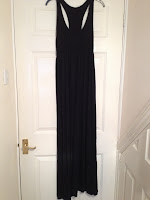 This is the joker of the pack, as essentially there's nothing I don't like about it. The problem I have is that I've been living in it for the past few summers, so it's turned predictable, a bit too cosy, and slightly shapeless. Time for a change...

I'm really putting myself on the line here - let's face it, what I end up with may be a pile of clothes that have to be passed on to a charity shop anyway, in spite of me spending hours on their transformation... but I'm going to be completely honest, and share all the highs, and lows, of this self-imposed test! The best case scenario..? I've made myself a new capsule wardrobe; one that looks stylish, is comfortable, and - most importantly - me!

If you'd now like to read how the above refashionings went, and what the final result was of my efforts, take a look at the long-sleeved flappy blouse post here, part of the gold dress becoming a pair of gloves here, and the black and white stripey dress becoming a little more fashionable here!
You might also be interested in my post on turning a long skirt into a halterneck dress...