If you've never heard of this place before, let me introduce you to one of west London's hidden gems... 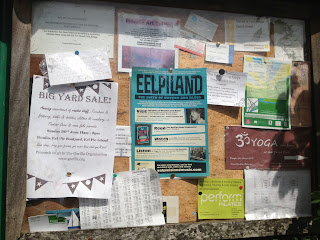 Actually, technically-speaking, it's in Middlesex - but that doesn't sound quite so enticing for some reason, so let's just pretend it's in west London for the purposes of this blog post. And, while you're at it, have a listen to the track I've picked to partner this post - for reasons that shall become more clear as you read on... I'm feeling a bit mischievous today - it may well come across in my writing...

There was an open invite to anyone who wanted to visit... E.P.I. (as I shall call the place from now on...) opens to the public only twice a year, I've been lucky enough to go twice; if you're interested in seeing it for yourself, keep an eye out for listings on what's going on in Twickenham. Normally the place is patrolled (I use that term loosely) by it's inhabitants, they are all quick to question new faces as to their reason for being there... Honestly, it's the perfect location for a 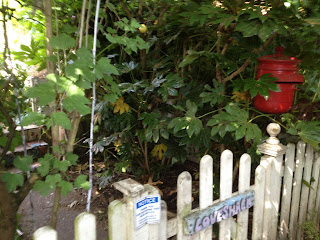 Famous Five novel - windy little paths overshadowed by weeping willows and flowering plants, with eccentric locals decorating their homes with vintage-looking signs that may have seen better days on a Vegas strip. It is the PERFECT location for a murder mystery, no doubt about that... and, even better, there are anecdotes that live up to the feel of the place, if you take time to ask the right questions... I overheard one of the locals recounting the story of the woman who used to demand 2p from every person who walked over the bridge to enter onto the island, and heaven forbid you refused to pay up... Honestly, if Miss Marple had tottered by whilst I'd be rooting through the attic sale, I wouldn't have been at all surprised.

So named because of it's legacy for selling eel pies...

...this no longer happens, by the way... the small island went on to get a name for itself for entirely different reasons... in fact, if you follow that logic, in my mind it should be called "What Happens on Eel Pie Island, Stays On Eel Pie Island...". It's rich - albeit fairly furtive - history is riveting; a small article written on the BBC's website gives a feel for what used to happen on E.P.I... The central venue for all the frivolity was Eel Pie Island Hotel; a sweaty, thriving, ambient den of jazz, and later, rhythm and blues, and rock, that saw many high profile artists strut their stuff... including Mick Jagger (see? The Blog Soundtrack I picked? Makes sense now, huh?!). Just like a real life scene stolen from Austin Powers, Eel Pie Island Hotel was the sort of venue that just doesn't exist any more. It's strange, now that the Hotel (that went on to be reputedly the UK's largest hippie commune) has been replaced with quaint homes surrounded by picket fences and trailing ivy, there's a sense of heritage, of glory-days-gone-by, of nostalgia, even... but don't make the mistake of thinking that nothing of any interest happens on that island any more, OH NO! The creative vibe has now morphed from music to art; interspersed between the mixed dwellings and boat houses are artists in residence, their studios based in and around a working boat yard, in the most 'crafty' of spaces. 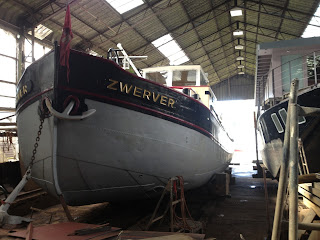 *Last year I went just before Christmas, and left with miniature glass reindeer, and a perfectly formed flock of pottery sheep (that now live on my window sill, chatting away around a flowering cactus, wondering where on earth they are).

This year I made a mental note of how much goes on, on that small island, announced on notice boards scattered throughout... everything from yoga to yard sales, from drawing classes to druid rituals. OK, so maybe there aren't any druid rituals - but it wouldn't surprise me if there were!

Before I left, I had chance to talk to one of the talented artists, Lee Campbell; originally from New Zealand she trained in at Chelsea College of Art, London, and had much to share on the topic of portraits, painting and drawing techniques, the local area, and much more... if you ever get chance, I recommend you visit her studio, if only to look at some of her work, her pieces with roses are my favourites! (I'm not an expert, obviously, just an enthusiastic amateur...). Lee's also a trained teacher... 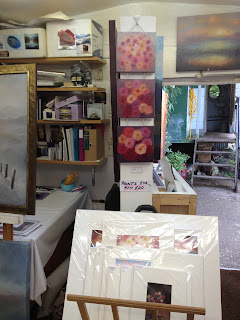 Actually, I'll let you in on a secret...

I'm presently trying to justify enrolling on one of her courses... I mean, surely I need to know how to draw? Isn't it an integral part of dressmaking, drawing? I can do it, can't I Mum, if I save up? For Christmas..? PLEASE? Maybe I should keep this argument to myself... OK - I'm taking this opportunity to put this promise 'out there'; I will, at some point, take one of Lee's courses. It's now on my Bucket List... along with visiting South America extensively, and learning how to flick flack.

Finally, you may, or may not, be surprised to hear I left with a souvenir... the best kind, in my eyes... a remnant of that afternoon... 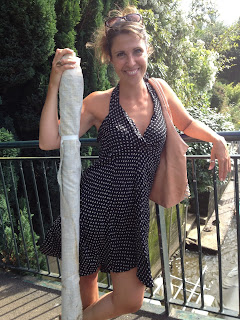 A fabric remnant! It was the last thing I expected to find, but the attic sale had a little surprise waiting in the rafters (literally, I kid you not, in someone's rafters) just for me! Actually, as it turns out, the fabric will be for someone else in the end (after I've finished another project, which is a surprise for someone, so I can't talk about it here, yet) - so I'll stop talking in riddles to leave you with the feeling I left with; Eel Pie Island is like a dream... all fuzzy around the edges, with people who look faintly familiar, but you don't know why...
(And before you ask, no - I wasn't suffering from any kind of heat stroke, and I wasn't under the spell of any kind of magic potions emanating from converted canal boats. Go, you'll see!).

If you want to delve deeper online, there are some fascinating pieces to be found; this article was written by an accomplished writer who went looking for a story, and left with his own...

Whatever happens from now on in my life, one thing's for certain, I'll be sure to follow any sign that promises 'frippery'... 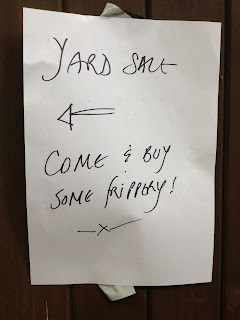