You know, I considered leaving it at that - the title of this blog post says it all... and what's NOT to love about an afternoon filled with crafting and cabaret..? Oh, and don't forget the afternoon tea, thrown in for good measure.... 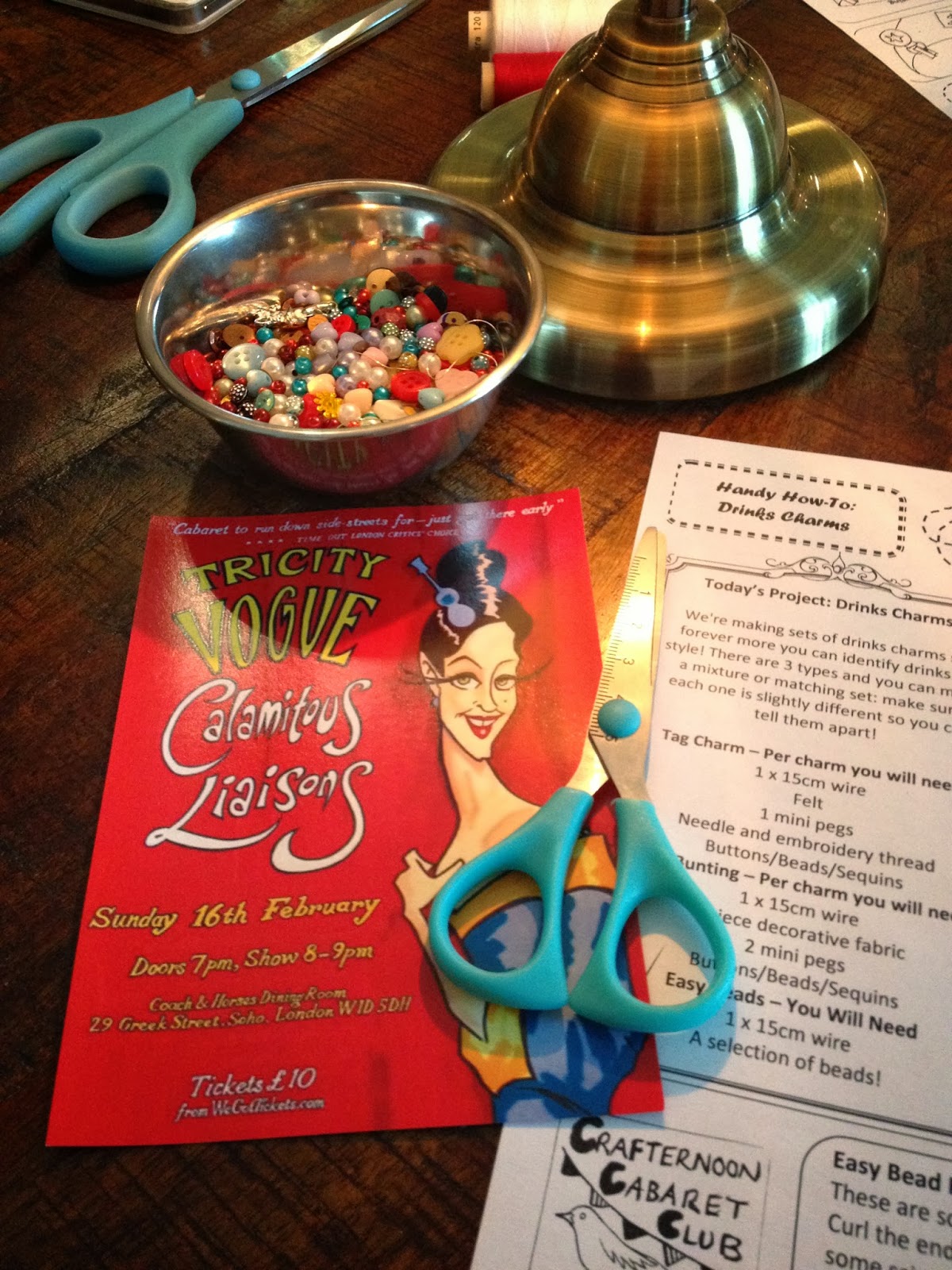 Sew... for anyone who's reading this and whole-heartedly into crafting, you'll already be salivating in anticipation - and so you should be! Honestly, if there was ever an afternoon that lived up to my expectations, this was it. My only worry, writing this, is that I won't do it justice... Let's get the house keeping out of the way, for this post I'm recommending this as your soundtrack - as always, it's my way of pairing up the written content with a musical backdrop... and let's face it, what good is sitting alone in your room? Come hear the music play...

Recently I became I member at The Hospital Club, and although I am aware of it's strong links with the artistic community, I have to say I was surprised when I was emailed the events calendar, and this popped up. Somewhere in my mind, crafting is a guilty pleasure. It's something people do at home, fervently gluing and sewing things together, only 'coming out' at certain times of the year when it's acceptable to do so... like Christmas. Then it's OK. Even Valentine's... make your own card? That's so sweet!
(*but) You made my birthday present? From some pompoms you thrifted from a charity shop..? Erm... thank-you! I think...
Obviously I'm crossing my fingers there's more of the same craftiness to come in the calendar year at The Hospital Club, I'll be there!! 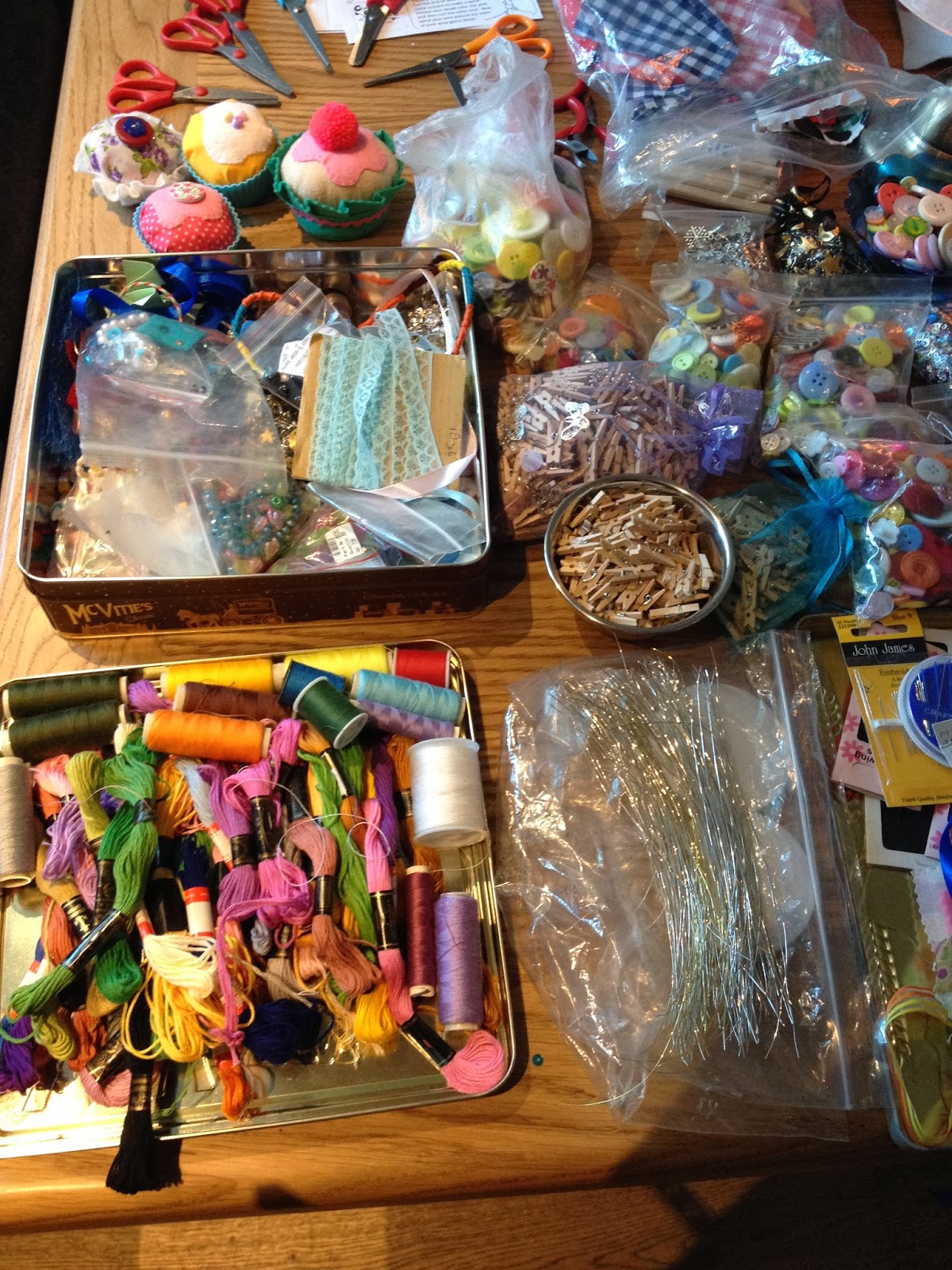 Lady In Charge, Hannah Cox, briefly took to the stage to welcome us, introduce the acts, and give an overview of what we'd be doing... The remit for the afternoon was to create bespoke drink charms... the instructions were left on our tables for us to mull over, clever considering that from a crowd of sixty women (and one fella...) we'd obviously be coming from different levels, skill set wise. The materials were spread out on a table for us to collect... and no limits! This is unlike most other workshops and courses I've been on - "Only two from this pile! No more than one inch of that fabric!" - so it did feel like we were being trusted to take only what we needed. How very grown-up! ;)

The cabaret was made up of two acts... The first, We Are Goose, made up of a couple of dapper fellas, singing about the most random comedy subject matter you could imagine...

One song was all about an island inhabited by men called 'Tim'... in fact, hear it for yourself here for a taste of what the guys are all about. As their home page states 'Think of troubadours and what they used to do, and then make it a bit more up to date, add some waistcoats – and you’re on the right kind of track.' Considering they were amongst the only guys in the room, they were very good at hiding any intimidation they may have been feeling!

The second act was Tricity Vogue - who describes her 'wares' as 'Charming, offbeat musical cabaret from a vintage songstress with a repertoire of surprising tunes and a colourful history of romantic misadventure..,' (that's her to a tee!). For some reason, one of her songs in particular sticks in my mind, with the chorus "Let's 'ave another drink!" making it the perfect soundtrack for the hen party on the next table (not that they were AT ALL raucous, they were surprisingly very well behaved!). 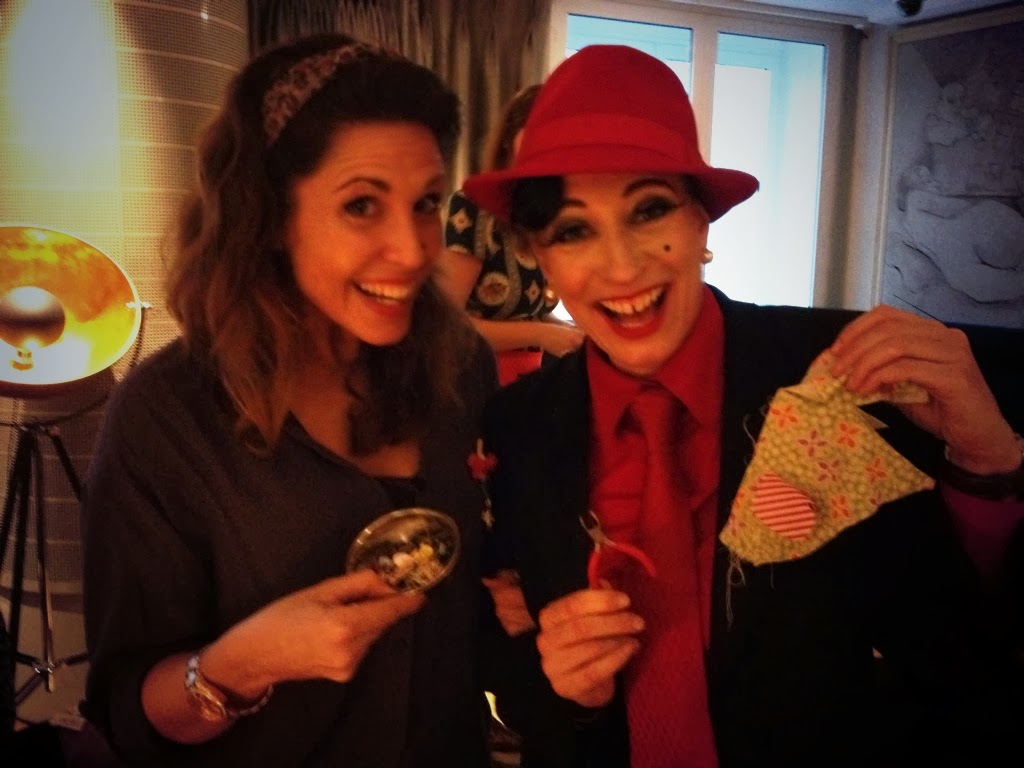 I got the chance to speak to Tricity when she came off stage, we talked about how she came to be in such a unique line of work. In a previous life she was a successful TV producer - but eventually left that profession as she felt she wasn't creatively fulfilled... I love getting the chance to talk to people who've gone through a successful major career change in their lives, it's just so inspiring. I often think how naive it is to believe that the decisions we make about our academic career at the age of sixteen (that will affect the rest of our lives) will just-so-happen-to-be right. I mean, how weird would that be? I understand the idea of vocations, and having a calling in life, but that is rare... isn't it more often the case that we grow into our bodies? That we understand ourselves much more profoundly with the passing of time - with life experiences? How are we to know what we'll love doing at the age of 40 (for example), when sat in a classroom at the age of 16..? I know I've gone off at a tangent (for a change, ha ha!) - but it's something I feel quite passionately about, the importance of self actualisation. And THAT is a conversation for another time...!

Interestingly enough, Hannah Cox, in charge of the whole event, had a similar backdrop to her career path (not the TV bit, the successful transformation bit) - and although making the afternoon run smoothly was a mammoth task, it was obvious she loves what she does. And I believe that's the secret to the Crafternoon Cabaret Club, all the moving parts work perfectly in tandem together... from beginning to end it felt like a treat. My friend Emily (and Partner-In-Craft for the day) said the same - it was a lovely opportunity to just have a natter, make something pretty, and be thoroughly entertained... the only thing that could have made it better was if it had been staged on a high speed train, ending up in Paris (or any other foreign city, for that matter)...!

As it was, The Hospital Club was the perfect venue - we crafters had the room to ourselves (in fact, I think we had the floor to ourselves) - and the service was great (which I wouldn't normally comment on, but it's no mean feat serving afternoon tea in the middle of that commotion..!).


If you're interested in attending one of these events, check out the Crafternoon Cabaret Club website - where there's also a list of crafty How To's if you'd like to mock up such an afternoon at home... maybe make it a charity fund raising event? Or a surprise birthday party for someone? (can you tell I'll make up any old excuse up to do it again?!) And, although these afternoons are very popular, and boast great numbers, feel free to spread the word - why not promote a feel good business that's run by someone lovely? Hannah deserves every success for her hard work and creativity; follow @CrafternoonClub on Twitter, or like the Facebook Page for more info on forthcoming events! 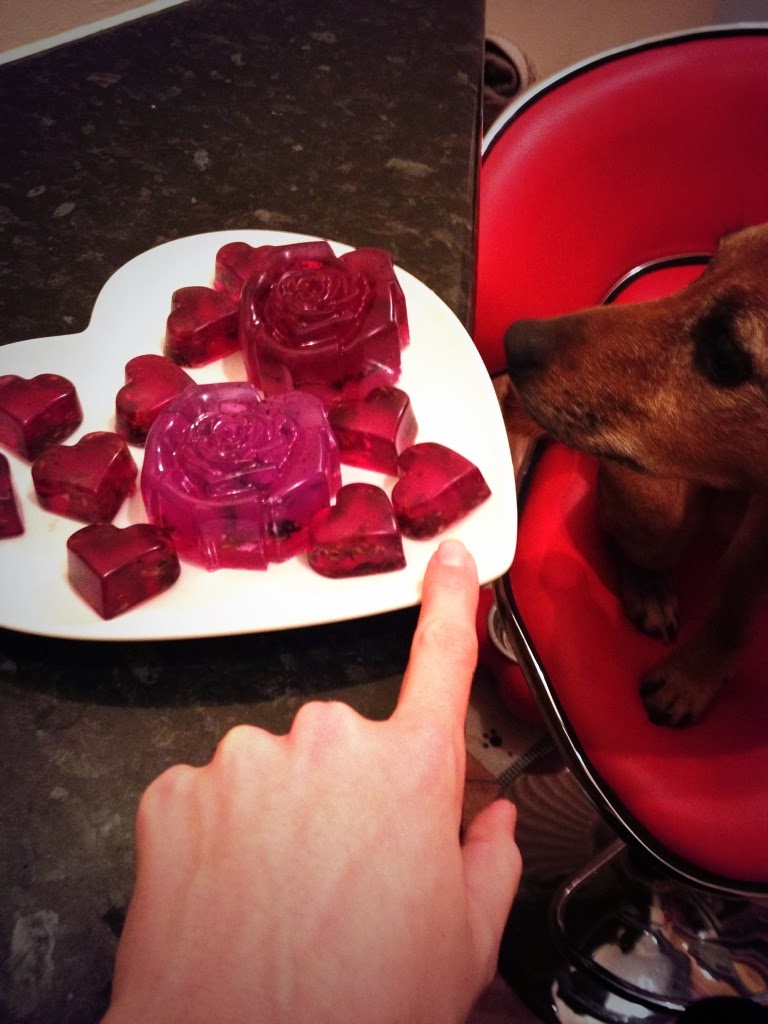 Do you have a story to tell, about a transformation in your life? Be it in fabric, or in lifestyle, it's all fascinating to me! Share in the Comments below, or e-mail it over...

Sending love to you all, a little late for Valentine's, but no less heartfelt :D