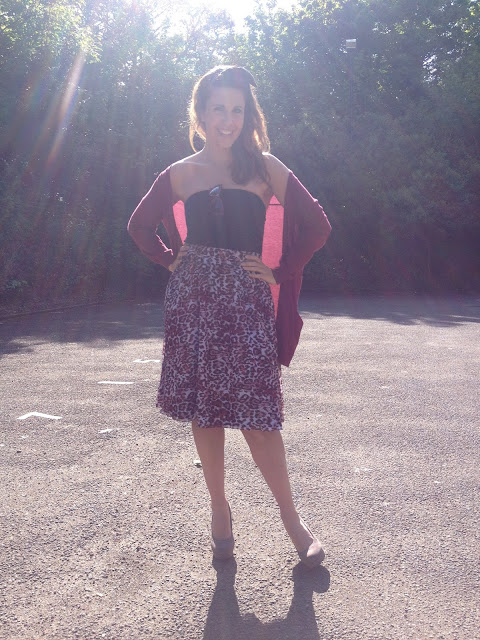 Hello! Long time no sew! So here's me, remedying that, with one of my favourite - and most difficult - projects to date, The Zinnia! 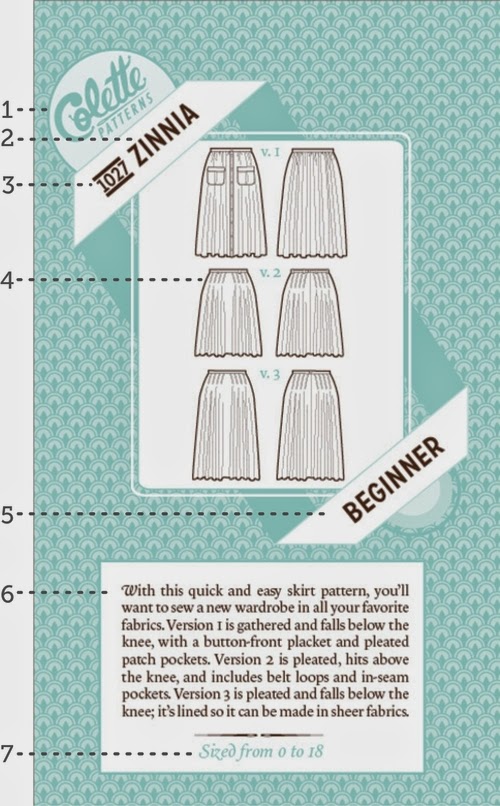 Thankfully, I was spurred on by The Stitchery Studio Sewalong to make The Zinnia Skirt by Colette Patterns, you know how much I love a sewalong! Not only do I get to make something new (and therefore pick up some new techniques), I also have the incentive of getting to see lots of other sewers' interpretations at the end of the competition- and I just LOVE that bit...! You only have to look at my Laurel post to know how much enjoyment I get from joining in with the international sewing community, even if only online, it gives me a lot of pleasure...

You notice how I called this one of my most difficult projects to date? You'll also no doubt spot the pattern envelope says 'Beginner' - and when I saw that I thought 'I know, this should be easy enough - I'll work with some chiffon or silk, and line it, so that I'm pushing myself and learning something in the process! Don't want it to be too easy!' Heaven forbid. That was my mistake... BUT! I'll definitely be better prepared next time... SEW!

The blog post soundtrack for today, if you've got the option of opening another window whilst reading this, is Michael Jackson's Off The Wall album... not sure why I've picked it, to be honest - but it's my favourite of all his albums, so why not?

And sew, back to The Zinnia!

Here are a few looks that caught my eye, before buying fabric and committing to My Zinnia... 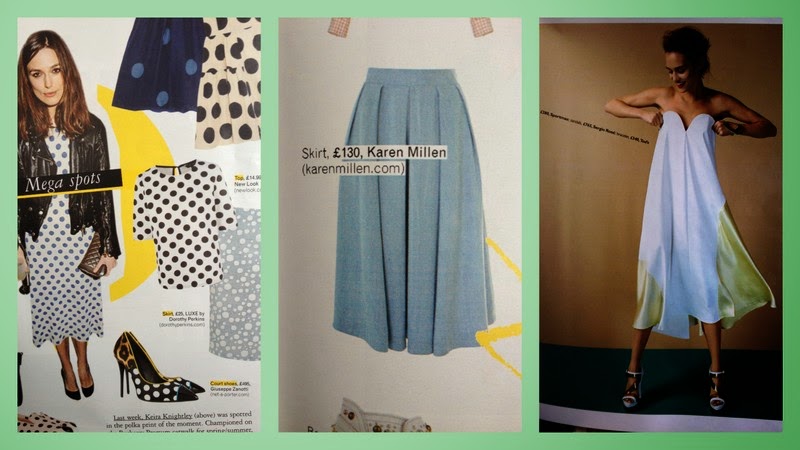 I walked proudly into the fabric shop, pics in hand, determined to find something that fit the bill... a light bright spotty fabric, possibly pastels, or maybe even metallics!

Now I'm not sure if this is a 'common ailment' with seamstresses in general, but I went into my local haberdashers, checked out those various options, nothing jumped out at me, and ended up with animal print. I mean, ANIMAL PRINT? I sat on my sofa with my new sewing stash, and wondered 'WHAT ON EARTH JUST HAPPENED BACK THERE?!'. I mean, not only did I go down that 'wild' route, I also took the time to find coordinating lining. I obviously meant business. Just goes to show, you might THINK you know what you want, but your subconscious creative mind has other ideas... 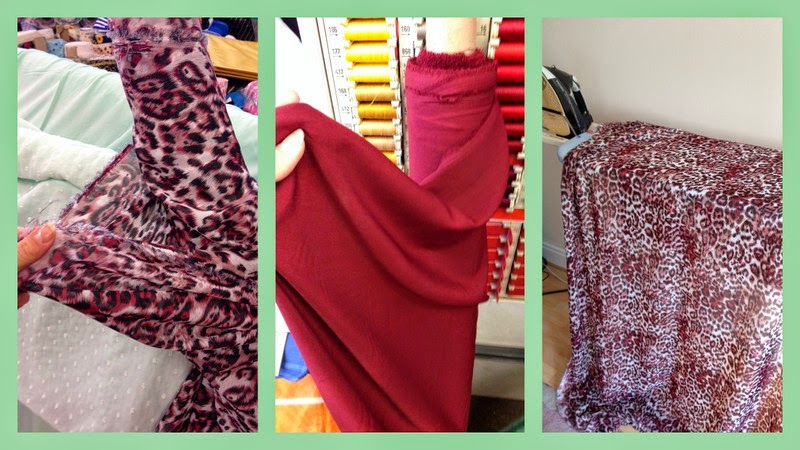 I won't go into EVERY detail about what went wrong, or how I tried to rectify issues, because that would make for tedious reading! I'll just focus on two specific problems I had... one being working with the fabric itself, georgette. It's beautiful to the touch, soft, flowing, lovely against the skin, but it's a pain in the ass very difficult fabric to work with... No sooner had I cut it, than it started to fray. And as this particular project had to be completed in various short sewing sessions (owing to other commitments... like eating...), there was a lot of handling, so the fraying got worse by the day. I had hoped the finished product would be mid calf length, 'as is the fashion these days' - but it was not to be; I had to ruthlessly cut off the fray, on more than one occasion, to create a clean line for hemming. And even that wasn't straight-forward. You know when you cut your own fringe, and you take a bit from one side, then a bit from the other, and in the end you're left with a tuft..? Well, that's what this was like - I ran the risk of being left with a mini skirt.


Thing is, even though the pattern suggests the 'usual' for the hem (turning up twice & sewing) - I was dreading it with this skirt... I mean, the thought of making that fabric stay put (did I mention pins were also the enemy? Small holes developed into missing threads of fabric, right through the middle of a panel...) - I was really worried. SO! I did what I usually do at times like these, I watched Youtube videos, read blogs on the subject, and looked in my own wardrobe at items of clothing that were similar... A layered black dress showed me a serged hem, which was later turned and sewn up, but I wondered what it would be like if I went for a tiny rolled hem...and left it at that. So that's what I did... 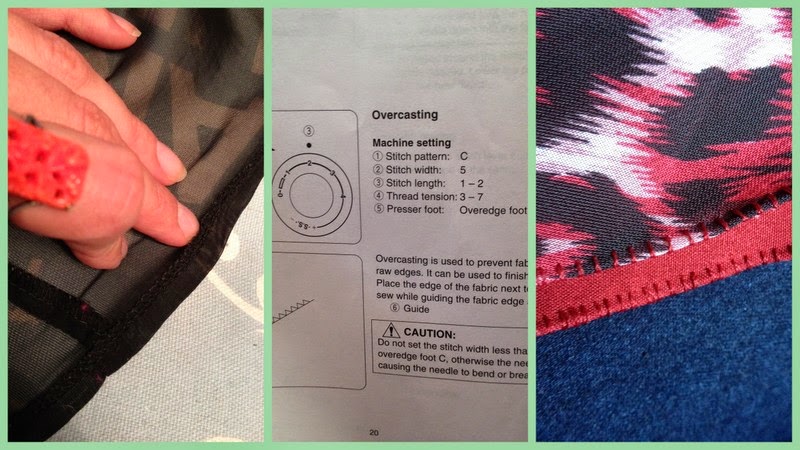 It was my first time using that particular foot (for overcasting), and so I obviously referred to the manual for help, but it turned out to be quite straight forward - and actually looked neat! I was a little nervous the fraying would return, and the hem I'd chosen wouldn't suffice...
As I write this, I've worn the skirt twice - once to afternoon tea with the girls (although you can't see much of the skirt in the pic!) - and once for taking the photos for this blog, and sew far, sew good. :) I'm also pleased to report that my glamorous girlfriends, Emily, Anna, and Helen were very complimentary about my Zinnia skirt... although they're all very polite, so were hardly going to be critical, were they? Just lucky it wasn't a tight fit... you know what afternoon teas can be like!! 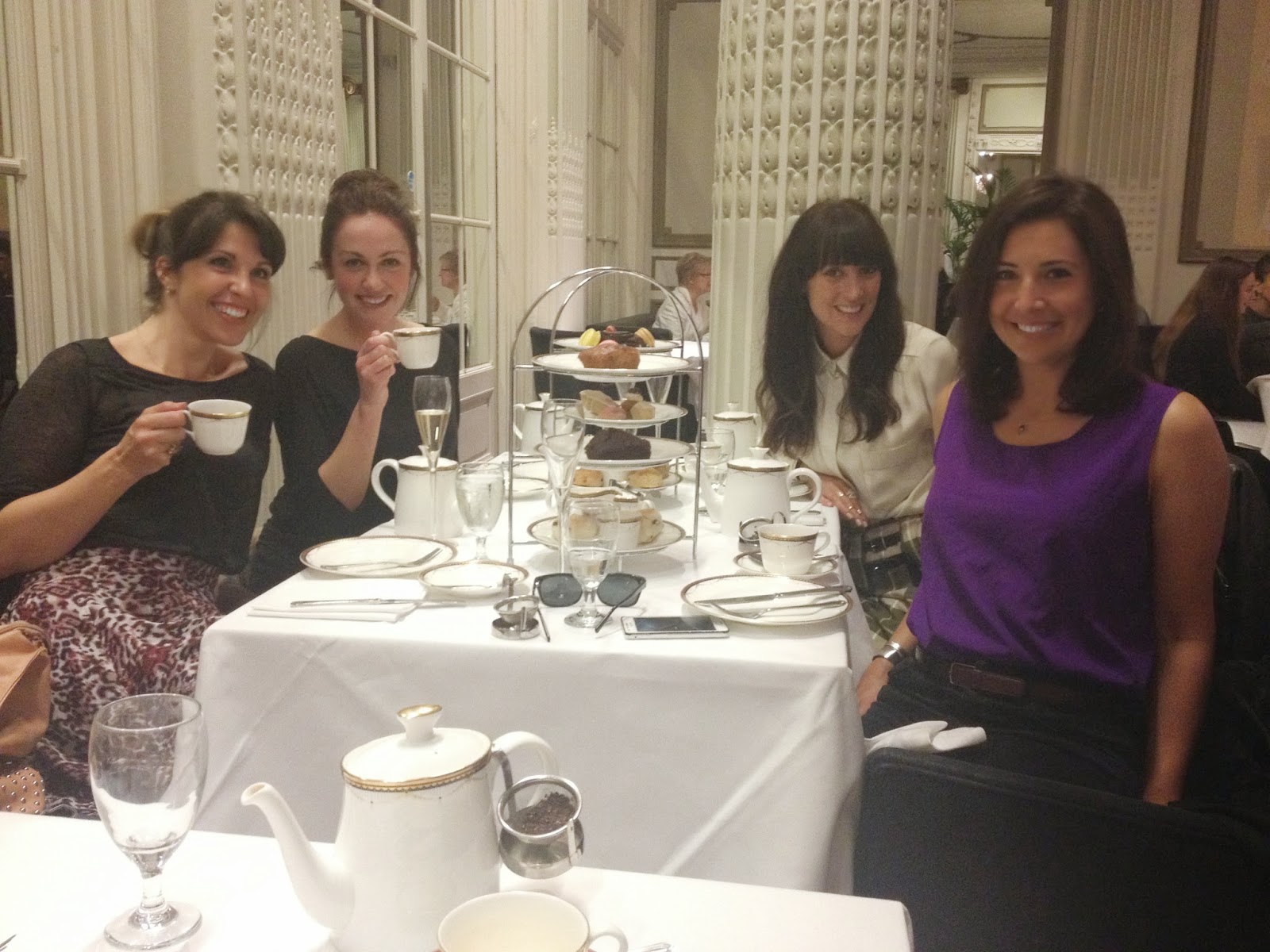 The other issue I came across was that of maintaining two independent layers of fabric, when applying the zip. In other words, how to keep the lining separate from the outer skirt, in spite of the fact they were joined by the zip... This might not make sense to you if you've never applied a zip to a lined garment, so I apologise if it's a difficult concept to grasp; basically I was eager to make the two layers of the skirt waft about 'romantically', all the way around - and not be stapled to each other at the back seam, just because the zip was there... and that's what the pattern instructions suggested. I have to say, on the whole Colette patterns (and their reference material online) is great, so I can't say too much about it... They are not generally guilty of thinking you should already know how to do certain things before buying a pattern; this is one of my bugbears with OTHER major fashion companies, but that's a post for another time ;) Suffice to say, I reached into the wardrobe, found a layered garment with zip, and analysed it for answers... the only thing was, I'd already sewn the zip in, and the two layers together... so then followed much unpicking, and resewing, but I achieved the desired result in the end! 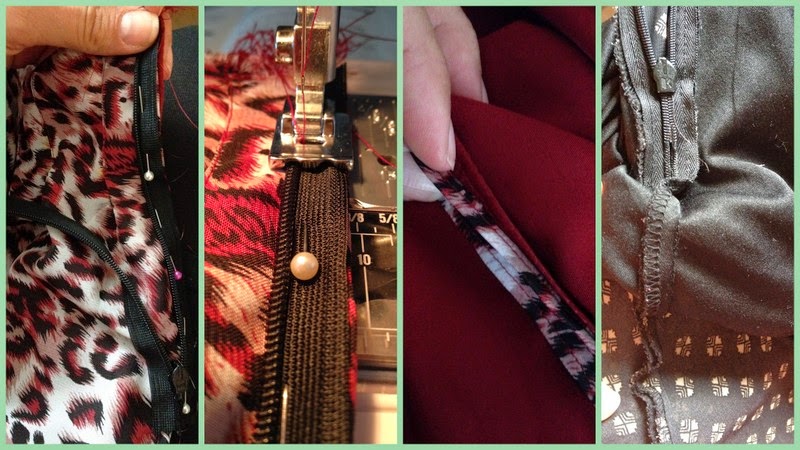 *It appears I'm not the only one who had problems with the zip/lining issue, if you're interested, the comments section on this blog post explains there is a mistake in the written instructions - which Colette Patterns will be rectifying when they print the next batch. (*too late for me!)

If you'd like to make the skirt for yourself, or in fact, any garment with lightweight fabrics - and you're wondering about how to finish things off, these two posts are great; I used this tutorial to make the French seams on the inside of the skirt, for both the lining and the outer shell... and found this on tips and techniques AFTER I'd finished, (which was rather unfortunate!) - but I'll definitely be referring to Sew Mama Sew's post in future...


Sew, what do you think? 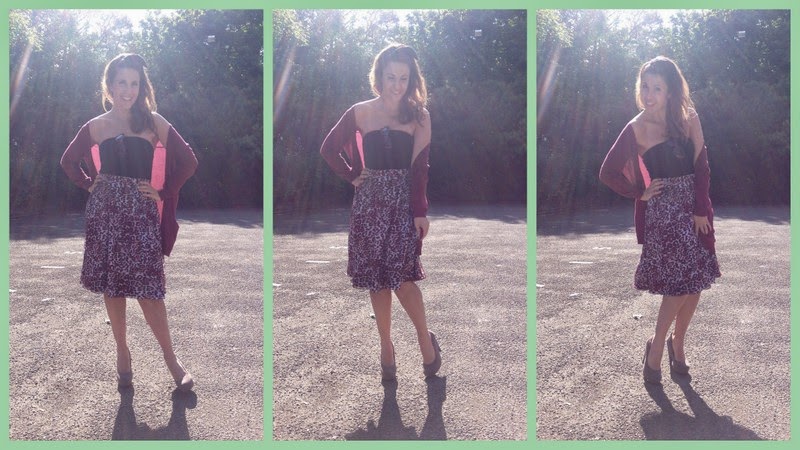 The great thing about this skirt is that it also ties in neatly with Me Made May 2014! What's that? Sew glad you asked... A couple of years ago, blogger Zoe Edwards, of 'So, Zo... What Do You Know?' came up with a pledge, to only wear clothing she'd made herself for the month of March... she then opened the idea up, as a challenge to her fellow bloggers, for the month of May - and here I am, a few years later, completely inspired by the premise. Check out all the bloggers using #MMMay14 on Twitter, Flikr, and Pinterest! Thing is... I would be living a VERY different life if I ONLY wore clothes I'd made previously, throughout the month of May... (If you can imagine someone who frequents summer parties, held in marquees, on warm days, quaffing Pimms and lemonade, attending the odd evening do as part of the ceremony? I'd be THAT person... Who IS she?). What with my summery skirt into a dress, the stripy black and white number, and the gold refashion... I have to say, it's made me evaluate the garments I choose to make, and what I'd like to focus on in future, to create a more... wearable... wardrobe... who knows, by next year, I may even have enough to properly enter into the spirit of the MMMay14 season, and make a pledge myself. In the meantime, this Zinnia skirt is a step in the right direction - I know I'll wear it again. And not just at a summer party held in a marquee.

I'm leaving you with what I call the Swishy Collage. It's purpose is to prove the 'swishiness' of the skirt. Without it, you wouldn't have any idea how much range of movement I have whilst wearing The Zinnia, or how little shame I have, and that WOULD be a shame :) 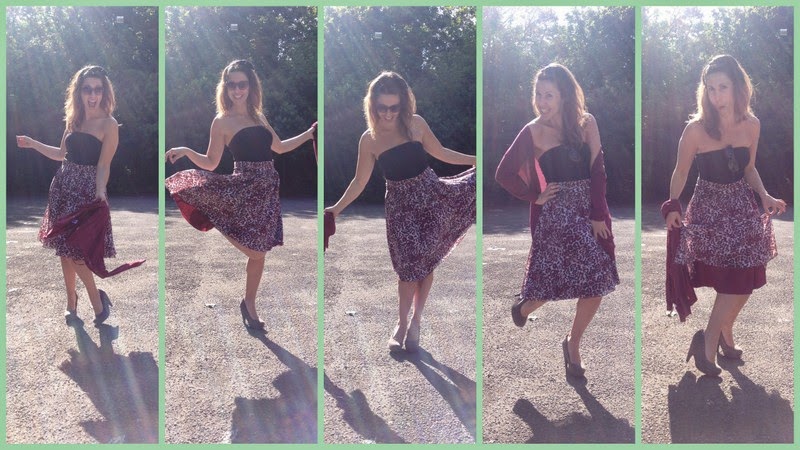 Thanks for visiting, and have a wonderful week!