The photos for this were taken so long ago, I almost wish I'd waited til a 'better hair day' to take the 'After' pics! Well no time for regrets, only time to share what's happened... 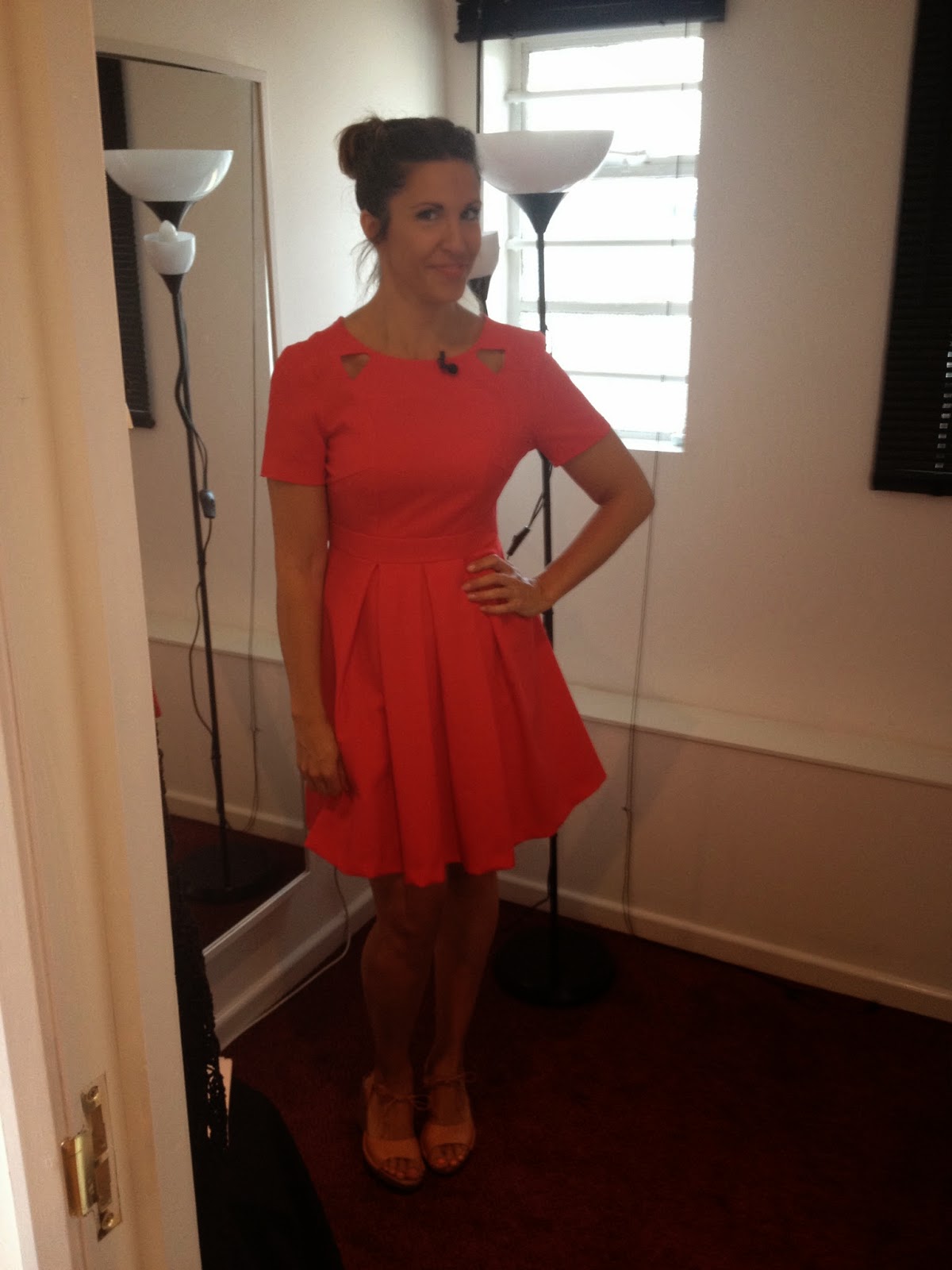 If I'm looking a little sheepish in this shot, it's because I felt a bit uncomfortable... this was just moments before I went into the studio (hence the small mic on my neckline). Although it might LOOK OK, the armholes on this red number have been tight since I bought it; and as it was fairly cheap to begin with, I decided I had nothing to lose by chopping it up a bit... Back to those BlogPostSoundtracks then - and today's is a less-well known track from one of my favourite movies, Romeo and Juliet... in fact, maybe this should be what every garment sings, just before being cut into...
"Dear, I fear, we're facing a problem, you love me no longer I know and maybe there is nothing that I can do, to make you do..". And it's by the Cardigans. What more could you ask for?!!

I made a decision to chop the arms off, and add some more 'interest' to the neckline, by creating peepholes... As there were already two there (near the shoulders, on the collar bone) I thought it would be a fairly easy task to replicate them - and then bind them. In something. I wasn't sure WHAT exactly (as I wasn't going to be chopping away enough fabric from the dress to use it again) - but I didn't want to just hem the holes, thinking it might be a bit of a fragile premise (*in other words, a future wardrobe malfunction waiting to happen!). In the end I thought, better to stabilise the windows whilst also making a focal point of them, as opposed to playing them down - and what better way to do that than with contrast binding? I considered dark red (looked like a mistake), white (looked like a uniform) and then settled on hot pink (already in my stash, although doesn't really show in my photos... which is a shame!). A bit of fiddling around proved the binding was going to be too wide, and therefore too bulky, so I started by chopping it down... 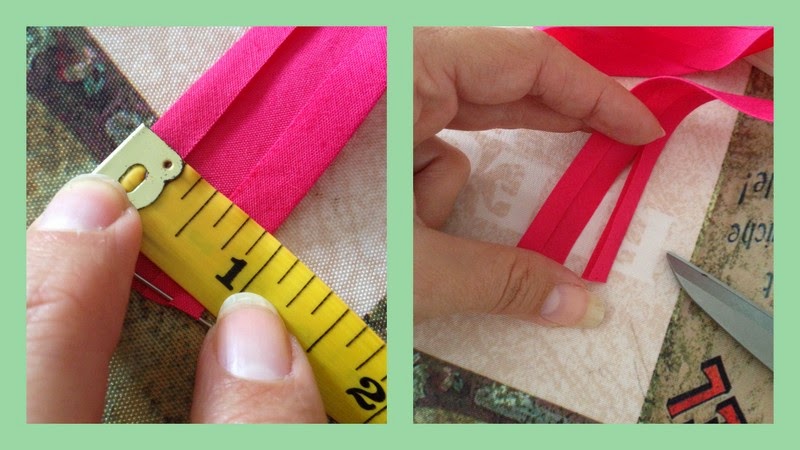 I then cut the arms off, before realising the lining MIGHT be a bit of an issue to reattach successfully again, completely in sync with the outer fabric - so learn from my rookie error, and - if you're going to do this - pin the armholes BEFORE cutting off! 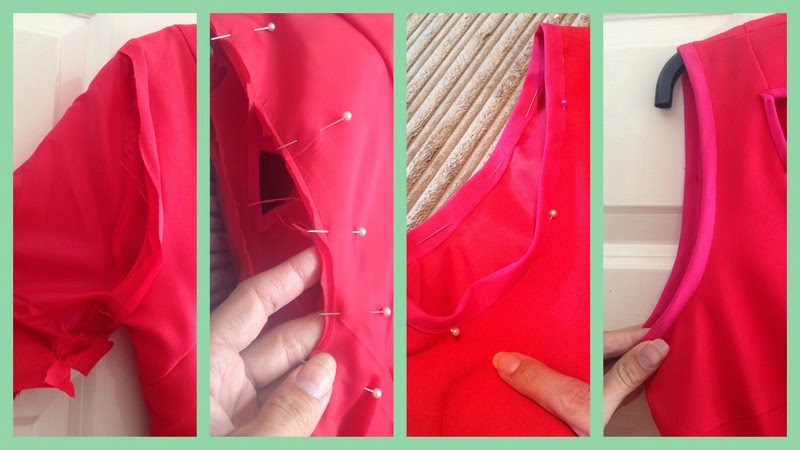 I was actually quite pleased with the way the bound armholes turned out, and it gave me great hope for the windows that were about to happen in the dress... I shouldn't have been quite so optimistic...

I put the dress on, before chalking on polygons that reflected the feel of the existing holes... (to make sure the new holes would fall somewhere respectable...). I then pinned around the chalk marks, tacked a long stitch through the lining and dress fabric to create stability, before cutting out the holes within... so far, so good... But then I realised what SMALL areas I had created to fill. 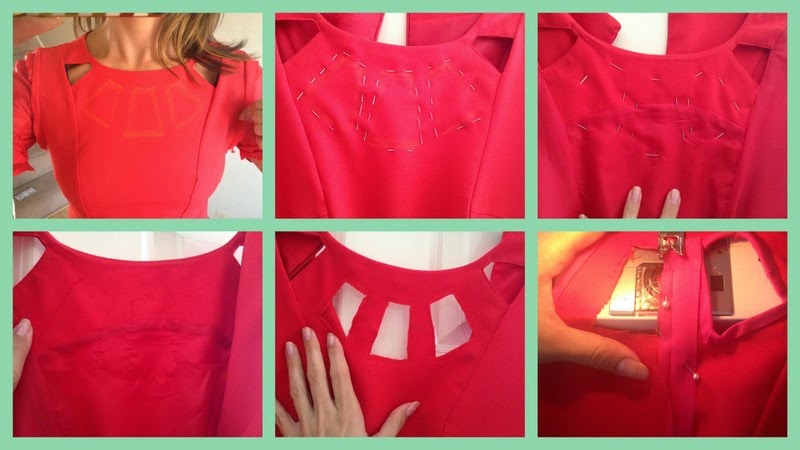 Have you ever been in the middle of a project and wondered what ON EARTH you were going to do, to rectify the situation? I honestly thought I'd have to kiss it goodbye, the reason being that the binding wasn't turning corners well. Or, at all. I get the clipping corners thing... but with bias binding, on fiddly areas?! I'm convinced there must be a technique I'm yet to learn that makes it look shop-bought... And when I learn it, I'll be sharing it! Or - if you have the answer, PLEASE leave a comment below... by the by, I spent so long umming and ahhing, Rod got a little bored. 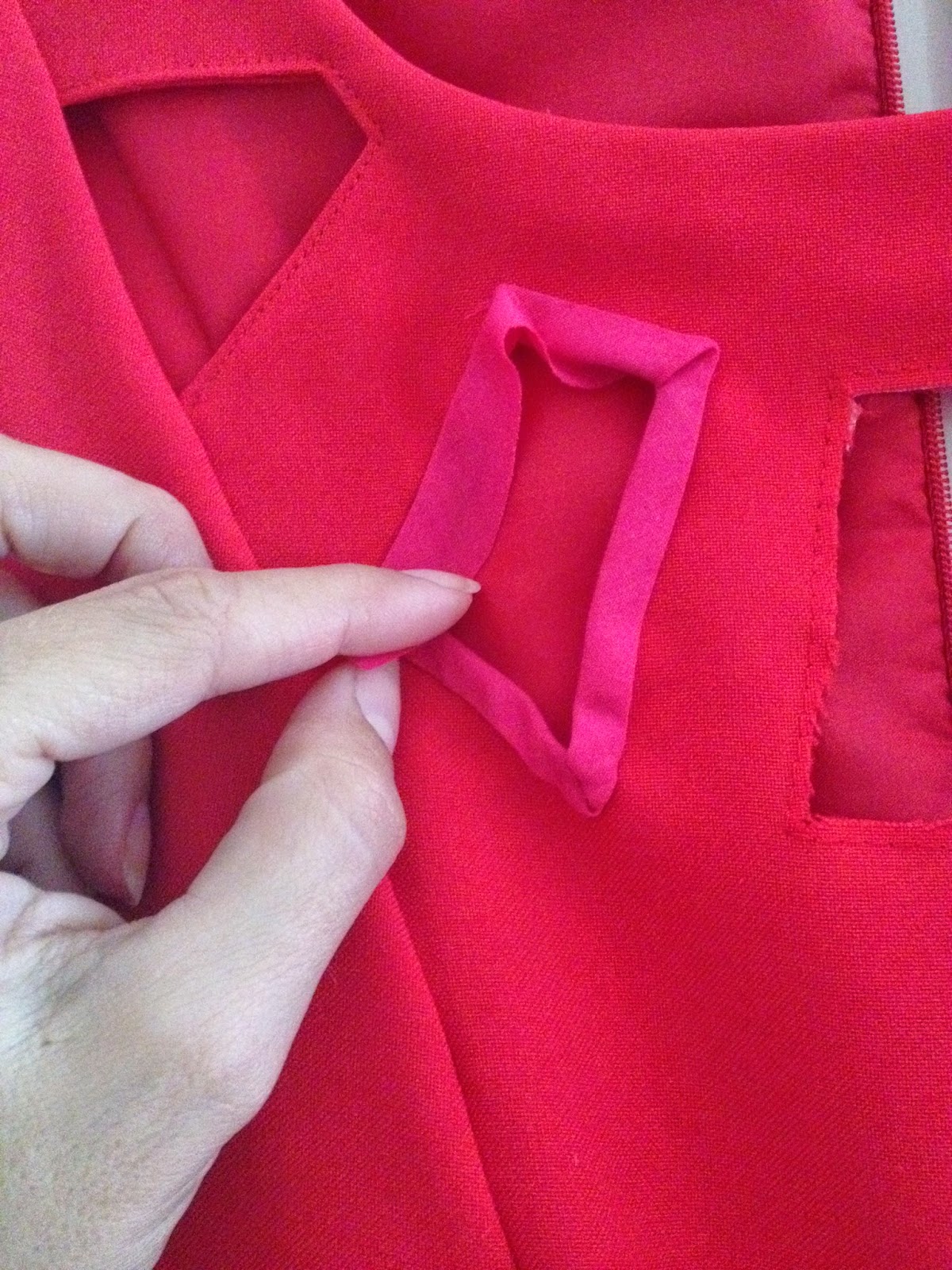 In spite of trimming the binding down, it still created far too much bulk for the dress; and although (post-press) it sits 'flush', I'm still looking for perfection... so... any ideas as to how I could do that are much appreciated! :) 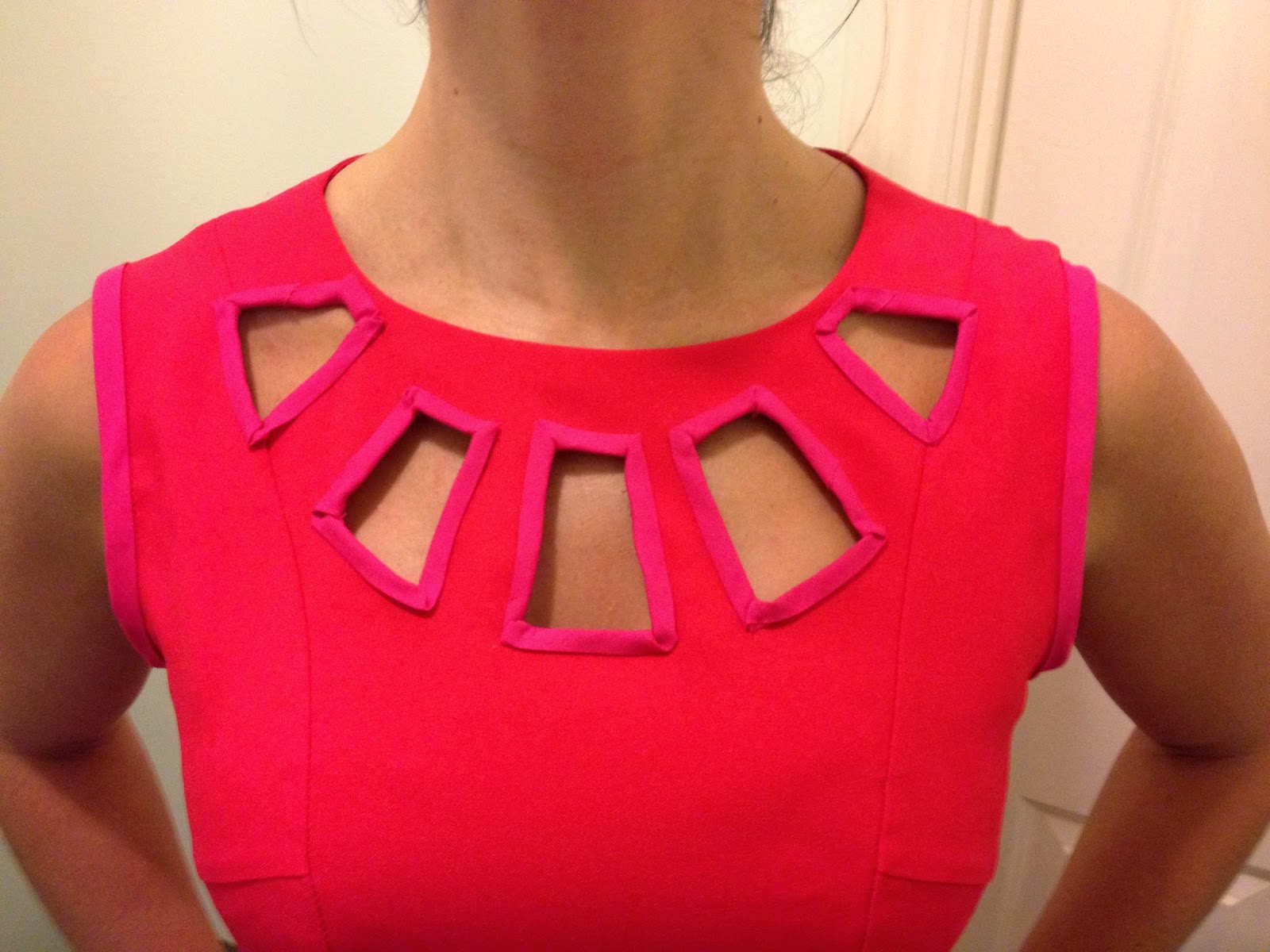 It's not too bad, but it's a bit like when you've decorated the lounge, and everyone piles in to admire your work - and you can't see anything apart from that small patch in the corner that you didn't have enough paint to apply a second coat to... Not that THAT'S ever happened to me ;) I s'pose all that really matters is that my beloved fuzzy-faced friend still wants a hug when I'm wearing it... What more could I ask for?! 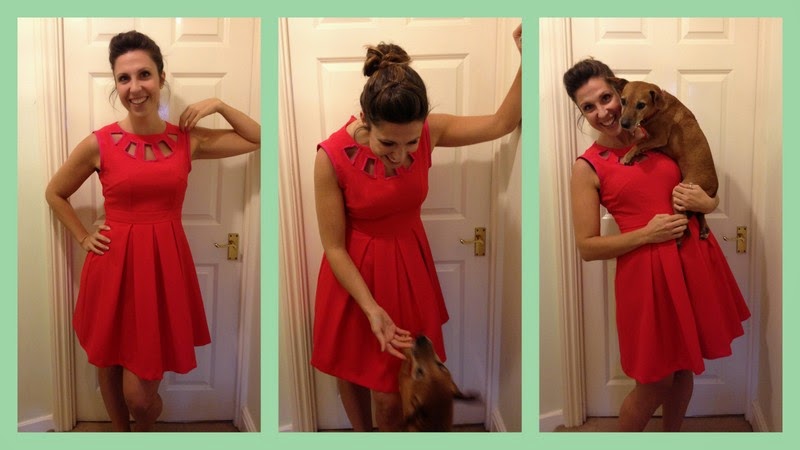 No - that's a complete lie. There's MUCH more I could ask for (if I was being cheeky, which I am) - I COULD ask to win a prize from an online competition I entered. AND I DID!! I'm SO chuffed I could burst, read all about it HERE! Sew Amy Sew set up a refashioning competition, with a whole host of different indie patterns to choose from as prizes, and I won one of the coveted places!! If you haven't already clicked on that link, let me tell you (as a statistics-aware-girl) that, given there were only 35 entrants, and seven of us were lucky enough to be called winners, that gave me a one-in-five chance of winning... And I like those odds! Who wouldn't? In all seriousness though, the other ladies submitted some excellent work, take a look at their creations on the Flikr page... I went on to choose my prize, a pattern I've been admiring from afar for a long time, The Nettie by Closet Case Files - hopefully it's something I'll be able to share with you, here, soon!

What with THAT, and the fact I'm spending the next week with Mum on holiday, celebrating her birthday (and mine, belatedly) - it's a great end to September! Wishing you a wonderful start to October... see you soon :)