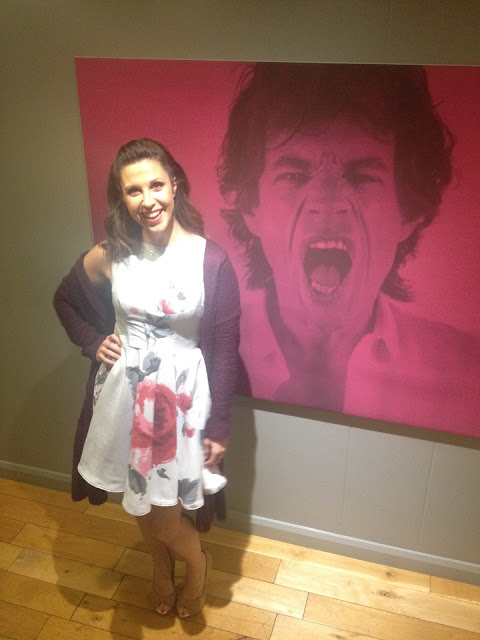 I've been collecting dress patterns for some time now, and have amassed a pretty large collection... so although I've been trying to curb my spending on that front (!), last year there was a free dress pattern attached to the front of Love Sewing magazine, made by Simple Sew Patterns - called the Ruby, which really appealed to me. So, here I am, all these months later, inspecting the results of that giveaway... 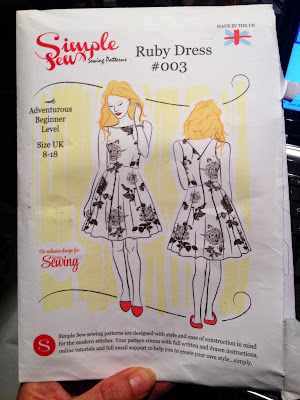 Today's blogpost soundtrack? Has to be Ruby really, doesn't it?! Hope you've got a way to listen to it, whilst reading on...

This is the first garment I've made in quite some time. My Nan's been unwell since just before Christmas, and although she's lived a long, mostly healthy life (she's now 95) - the illness she went down with has sadly lead to a catalogue of new health issues. It made me feel sewing was a bit self-indulgent, pointless even, with a loved one suffering. 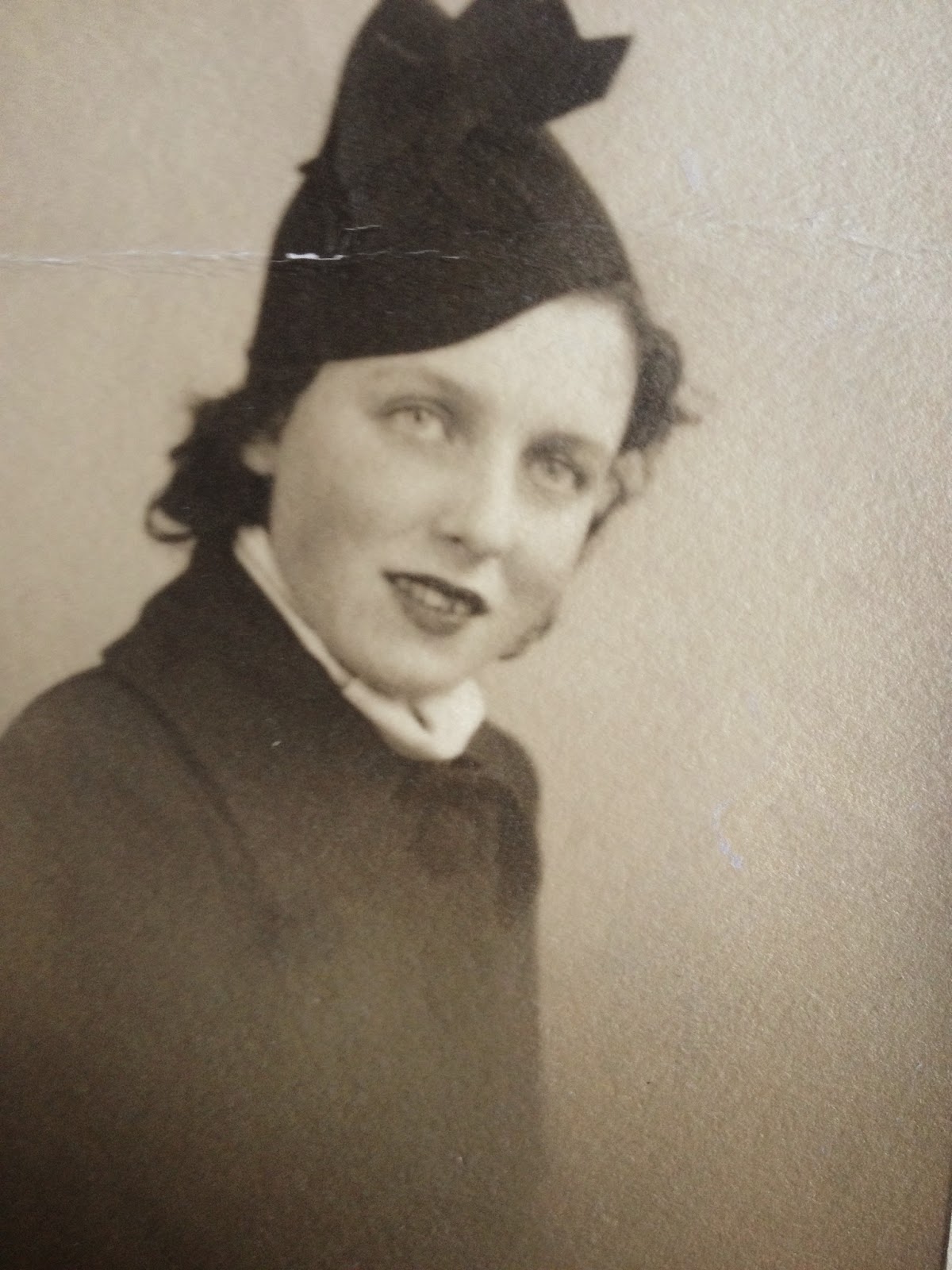 My Nan has been the most pragmatic in the family about it all; I think it's easier to cope emotionally, when it's your own body you're dealing with. What I didn't expect was that I'd miss sewing. I think I find it therapeutic, and although sometimes it takes a HUGE amount of concentration - I think that's what makes it relaxing, if that makes sense? No other thoughts can pervade, when there are fine details to focus on. I've also been encouraging my Mum to do things with her time, aside from worrying about Nan - and was so pleased she returned to the stage to perform in a comedy (it's the second week run this week). This, too, needed her full concentration - and I've been so grateful for the social support the theatre has given her over the past few months.

Aside from all that, I don't believe Nan would want us to use our spare time to sit worrying about her (although that's what all the family are doing). So as I send her love and light, hoping she returns to good health, and cherishing the time I have with her, I'm also reinvesting some time in my love for sewing.


Aside from my bursting-at-the-seams pattern stash, I have also acquired a ridiculous amount of fabric (most of which I've moved into the loft, so I'm not embarrassed when visitors catch sight of it, oozing out of every drawer). So, you'd think I'd have reached into that collection to make this dress, wouldn't you? Ah well, you're wrong, see? I had a perfectly good duvet cover that was just asking to be upcycled into a garment. 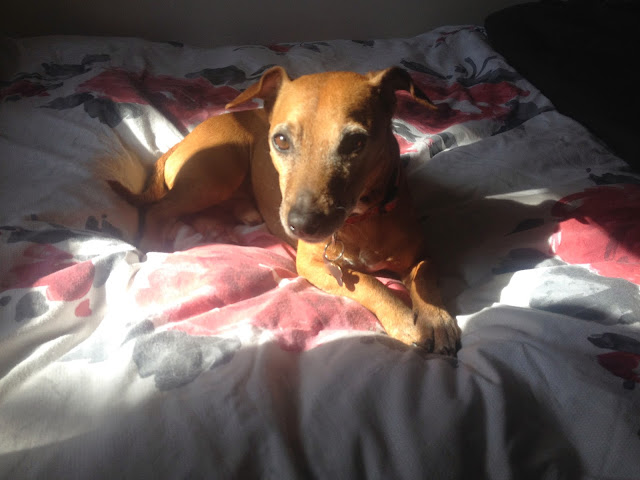 This isn't a thrifty exercise in fabric management - I was just desperate to make it in a rose print, and the duvet print fit the bill perfectly. Maybe I was also influenced by the pattern envelope design?

Owing to the fact it was a fairly straight-forward pattern to follow (for the 'Adventurous Beginner'), I'll cut to the points that stood out for me...

What was right with this project?
The pattern was a giveaway, and I had the fabric in; everyone loves a free dress, right? Added to that, there were no fiddly pieces - and the parts all came together very easily. There's something very satisfying about making a bodice that fits well, and it's my first experience of sewing and wearing a bateaux neckline; I think I'll be making more!
I have found previously that circle skirts are not the easiest to hem (there's just so much of it, and the turning-up is tricky), but I presume that just takes practice, right? Do you have any tips to share..?
In the end I finished the raw edge with a zigzag stitch, then turned up - and covered the inside hem with some pretty ribbon I was given for Christmas by my friend Emily. It's just gorgeous - and proves you just never know when these bits will come in useful! Here's a little pic of how the hem turned out, I think it's pretty when you get a little flash of it (doing a twirl, for example, how very grown-up of me...). 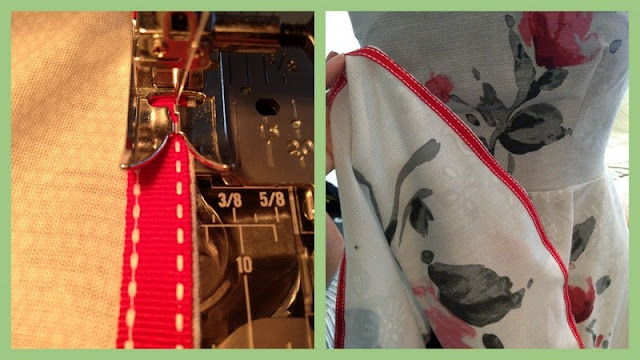 There were a couple of moments where I had to read the instructions out loud, where they seemed to contradict what the illustration was showing... which leads me onto... 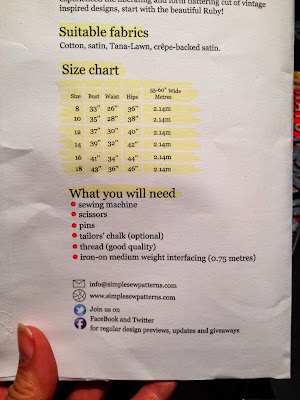 What was wrong with this project..?
Under the heading 'What you will need', there is no mention of a zip. As this isn't made from a stretchy material, it's obvious there's going to be one -  but there was no word of it at all, right up to step 8, "Pin one side of the zip in place..,". Oh right, which zip is this then? Kept that one quiet, didn't you?! Also, there were no conventional zip markings on the pattern to be transferred onto the pattern pieces (as there would be normally) - and no word of how long the zip should be. This was a good lesson in 'read through the instructions first before starting', as I ended up having to rush out to buy a 12"exposed zip. Not my preferred choice, but my local haberdashers doesn't stock a wide range of the concealed version... no word of a hook and eye finishing either, so I've skipped that part (naughty me) so I can post this today!
I was also a bit thrown by the conflicting advice in step 4a. 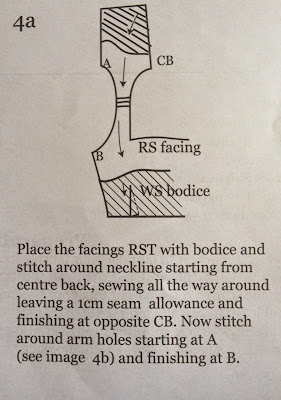 I think someone with a bit of experience would ignore the picture - and concentrate on the printed (worded) instructions, which were right. (*Is this where the 'Adventurous Beginner' label comes in to play?) I think this picture refers to the 'pulling through the shoulder cavity' part which comes later - although the illustration looks like the finished version, and not the pre-pulled version... Are you still with me?! 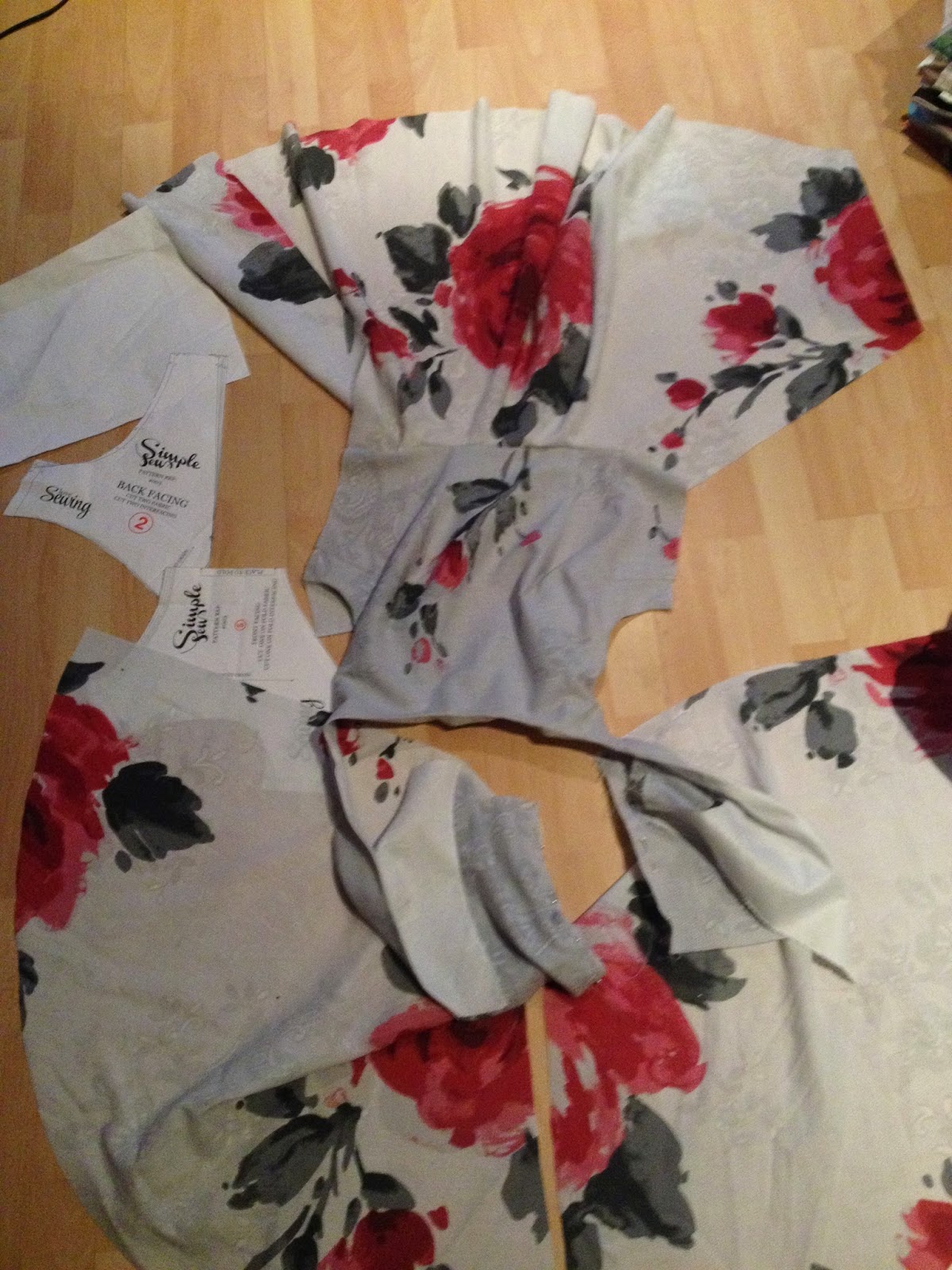 The polycotton duvet was a breeze to sew up. Although the rose pattern made for an interesting couple of hours, working out a) which part of the design to put where, and b) how to pattern match, especially at the seams... It's also one of those duvet covers that has a different design on the 'inside' to the 'topside'. I decided to use the larger, more bold rose print, on the skirt of the dress, and the smaller print on the bodice. You can tell me if you think I made the right call!

My tips on how to choose your bedding for this project? Well although some of the following points may seem obvious, here goes...
In conclusion, although I was worried about the sheet being a bit sheer (in dress form), I needn't have worried - the bodice is mostly lined with the facing, and the skirt is 'floaty'... even if it was see-through, there's plenty of room to wear an underskirt - yes I realise that's rather old skool, but that would in fact help with the vintage, 50's vibe of the dress.

SO!
Here's the dress inside out, so you can take a look at the interfacing, and dart details... and maybe even the pattern matching at the back and side seams (but not too closely, mind!). 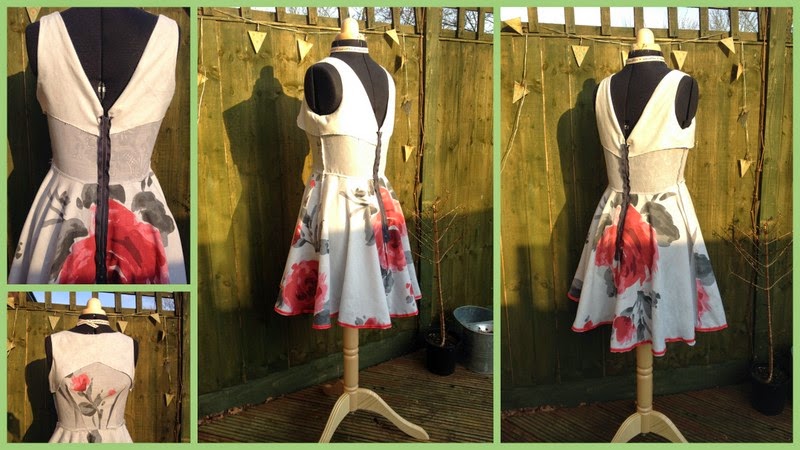 and the obligatory Before and After; 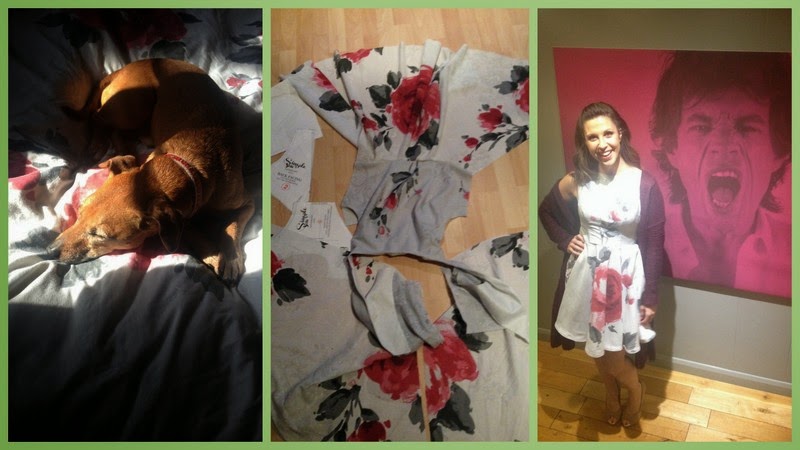 Sew What Comes Next?

Thanks for stopping by, wishing you a sunny start to springtime, filled with hope and new beginnings :) 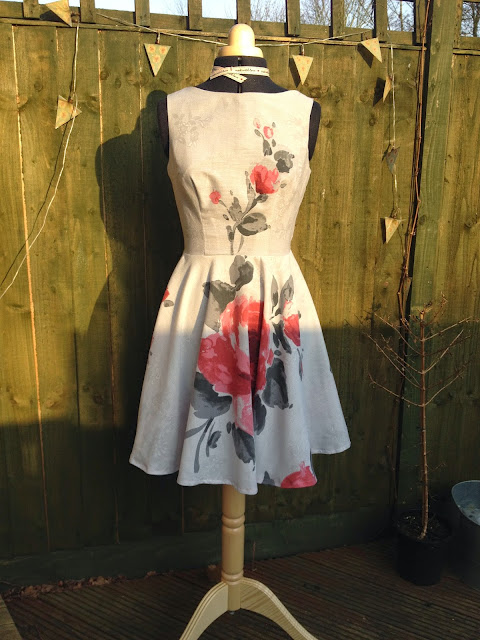