You may recall from the first part of our interview, that we really did have a bit of a chinwag! And sew, now to the nitty-gritty of what goes on behind the scenes, of The Great British Sewing Bee, for CL, as Sewing Producer... whilst also picking up a few handy tips along the way! 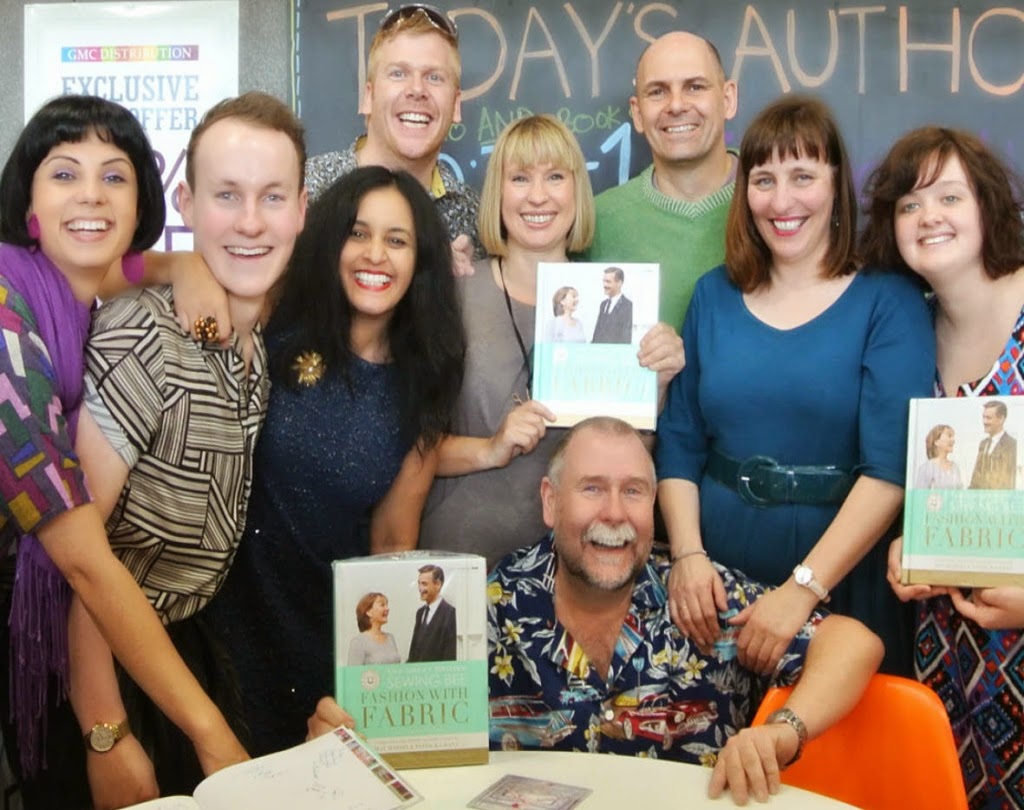 Was it a Seamless Transition, from Sewing to TV?

"As a costume person, I'd already worked in TV - mostly adverts, so I was aware of the pressure behind the camera - albeit in a different way to how I am now... when the makers of The Great British Sewing Bee were looking for judges, they were also looking for technical experts..", and that's where CL became an invaluable part of the team. 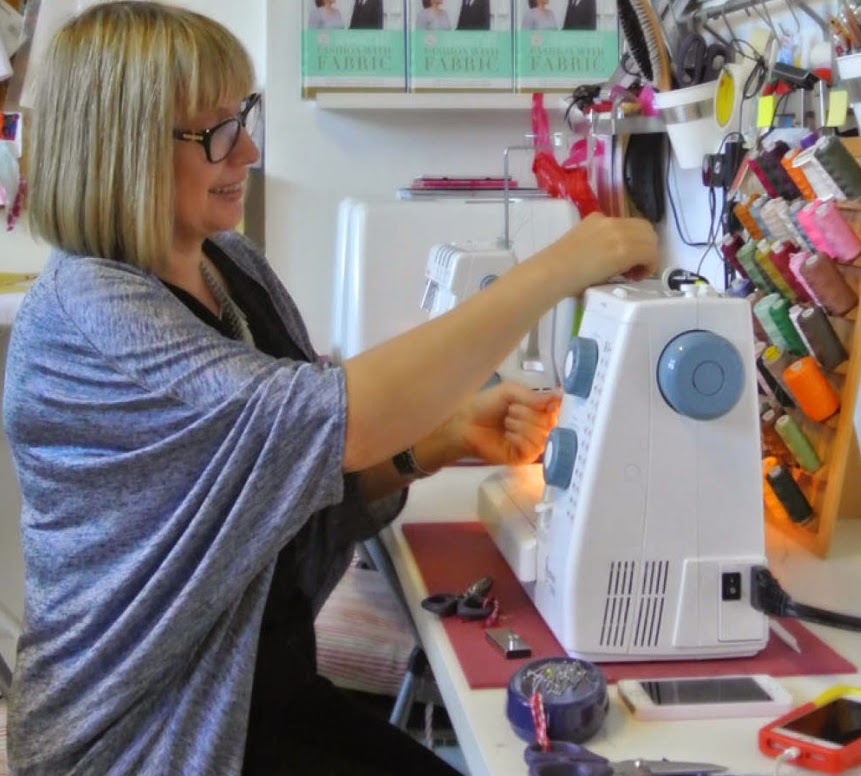 As the Sewing Producer, it's CL's job to make sure that the audience understands the processes that are going on. "The show's very much about people's personalities, and the interaction between them, but it's also about being presented with a challenge that they don't know anything about... so we want to get footage of them sewing, and the sewers' approach to their sewing.  There's a big team of us, we prepare patterns specifically for the show under the judges' brief. Given that brief, we go away and sort out the more practical elements. Being the only sewer on set - I'm the only one that knows we're focusing on the invisible zip that week, for example. It's also my job to keep an eye on set, what's going on - the judges can't possibly watch everyone all the time, so if I see something that they might want to get involved with, it's up to me to call their attention to it..,".

I ask if conveying sewing - the tactile elements - is hard, production-wise? "The production team is good at making the kind of TV show that's about people, and feelings, and their approach (*they also make The Great British Bake Off). So whilst it may seem mean to give a challenge that involves a technique they haven't come across, by putting someone out of their comfort zone - you get to see their approach, and see more of their personality. When no-one knows what they're doing, they ask each other questions... In spite of it being a competition, it's a really friendly competition. The sewers all have a shared hobby, so for a lot of them they're used to sewing on their own, and never interacting. Now they're with other people who love it just as much as they do. Part of giving them challenges that they don't know how to handle is that it sparks that chat, and makes them want to help each other." 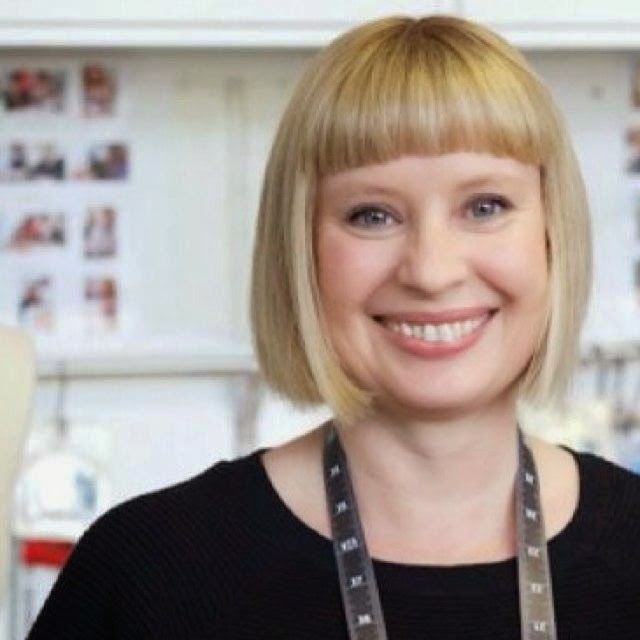 I remark how unusual the show is for that reason, that they all seem to really get on and like each other - in spite of the fact they're there to win, "...they all stay friends after the show ends. You know, sewing is such a personal thing - and when they discover there are other people with sewing rooms hidden away that they don't talk about, it's a bonding experience."


So is GBSB to thank for sewing coming back into fashion?


We both agree that sewing is 'hot' right now, I ask CL why she thinks that is "I think we've had a shift in our culture... so when someone talks about high street clothes, and they say it's made in a factory, most of us are quite divorced from the concept of making clothes - when actually a factory is just a big room full of people working really fast. It's not a robot making your clothes if you buy from an expensive store on the high street. I think seeing human beings make clothes when you're not normally exposed to it, has become fascinating. People have gone 'Oh - if they can do that, maybe I can do that!'. Also, these days, fashion has become so singular, there's just one path... and if that's not you... we don't have so many independent stores on the high street any more, so no matter where you go in the UK, you're going to buy the same clothes. So, if you don't want to look like everyone else, the only way to do that now is to think about making your own." I concur, models don't look the way I look, in turn I can't possibly look how they look in the clothes they model - so therefore it can be upsetting. In the past I've tried something fashionable on, only to end up thinking there's something wrong with me, because it just doesn't look the way it's supposed to...

Let's face it, it doesn't have to be an all-or-nothing approach when it comes to dressmaking, and CL agrees that refashioning can be a gentle introduction to sewing; "it can seem daunting to make your own clothes... if you've never sewn before, making your own jacket feels really scary! But, with just a FEW skills you can upcycle, or you can transfer something... with the ebay culture of buying something, and not knowing the fit til it arrives, you could just give it a nip and tuck, and that doesn't take long - or take many developed skills, and THAT'S what I think has sparked such an interest."

When I watched CL guest presenting on Create and Craft TV, I realised how many tips and tricks CL shared naturally, as she sewed - any juicy tips to share with us now..?
"If you're new to sewing, it is solitary, and you will make mistakes; it's a good thing to go online and find other like-minded sewers. Most people will share their mistakes, and you'll realise you're not the only one that's stitched the armhole up, when you meant to put the sleeve in..,". This is something we see quite often in GBSB; the time pressure being such that those silly mistakes are hard to avoid!

Speaking of which, it can be rather expensive making mistakes with this hobby, being that fabric can be rather pricey. I also find it surprising, and disappointing, to follow a pattern and it's instructions to the letter, only to find it isn't gospel; there are errors (IN PRINT!) that have made my garment less-than-perfect... CL agrees, "if you're making a really basic first skirt, just make it in an inexpensive fabric, and keep trying it on inside-out, throughout the sewing process - because if you just pin it all together and it doesn't fit, you can take it in, or you can let it out, then psychologically you're going to feel better about your own skill set. And if it's not an expensive fabric, but you've got something wearable at the end of it, you won't get that crestfallen feeling, like you've just wasted your time and money.
The big thing I've found with dressmakers is that they go through the entire construction process without trying it on, which is what you'd do on the high street... but the whole point of sewing is to try on, hold it up against yourself, keep trying it on. Before you put the waistband on your skirt, make sure the waist fits, it's much easier to adjust the size. That's the part that's really soul-destroying, the unpicking!!". Couldn't. Agree. More.

So how can we learn more from CL? So glad you asked! The third season of The Great British Sewing Bee was paired with the release of a new book, the first written by CL, The Great British Sewing Bee: Fashion With Fabric. With 30 dressmaking projects, and fabulous reader reviews (have a look, they're saying it's 'the best yet' to come from GBSB!) - I've just gifted myself with a copy. Well, you can never have too many sewing books ;)
I've been going through a bit of a dry patch, sewing-wise, which is why shows like GBSB are so valuable to me; and finding a professional who can talk so passionately about what they do, can provide real food-for-the-sewing-soul. So if, like me, you're trying to get out of a rut, have a watch of this short interview with CL . Proving that even pro's have their ups and downs... the only thing that really matters after being knocked down, is that you get back up.

Many thanks to CL for the interview!! Check out the 1st part of our chat, if you missed it, here - and if you'd like to stay up-to-date with Thrifty Stitcher classes, watch a few of her quick sewing tutorial videos, or just say "Hi!", follow CL on Twitter!