Gema's Got a Brand New Bag!

I won't lie, I found this week's challenge in the Refashion Runway hard. Why? Because I love bags! I am THE bag lady... And the thought of making anything less-than-usable seemed absurd - which left me with the fact I had to make something I WOULD use, which meant I had to think fast; what did my 'bag wardrobe' lack? 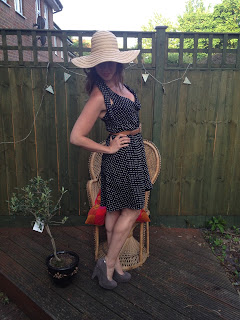 That question was too hard - so I decided to go about it another way, and use something I already owned... and just see where it took me. I found a hat in the cupboard I've worn before, but only once (there's far too much room in the top, and not enough width around the brim...). This was the hat I used a couple of years ago, to accessorise my skirt-to-dress refashion (in the photo).

I like the idea of it, always do with hats - but when it comes to choosing it to go with an outfit, I always find myself putting it back in the wardrobe (because of the odd fit). And so my 'Before' was born! A hat!

A short blogpost soundtrack for today - just replace the word 'Papa' with Gema' every time you hear it, 'cos Gema's Got a Brand New Bag! ;)

I started by removing the scarf, and de-constructing the hat. When you look closely, it's made up of one long piece of raffia... or is it wicker..? Either way, it's about 1.5" in width, layer upon layer, sewn in such a way that the hat shape is made. So, to start I removed the inner bias (being used as a stiffener) and unravelled the raffia, just to the point of where the brass rings were. 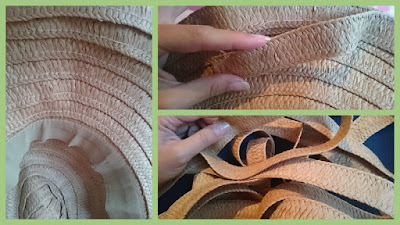 I then turned it inside out, and pinched the bottom, to create a steady base for the bag... I played around until I felt I had the shape I wanted, and then applied glue to the inside - before leaving the bag overnight, wedged under the base of a big lamp. When that was dry, I turned it the right side out, and set about sewing the raffia back on itself, much like before - only creating a bucket shape as I went... 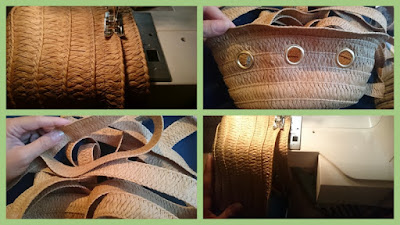 I was then left with an interesting shape - and realised it would probably need quite a bit more work; lining, straps, maybe even bag charms (too much?), that would all be easier to choose if I had a theme. I chose 'mariner'...

Having a look through my stash, I found a couple of bits that could come in useful, including a magnetic clasp, and a cute sew-on anchor motif. I then went to my local charity shop, and bought a stripy shirt for the lining, a pair of kids shorts for the pocket (and maybe a matching purse if I had time) - and a pair of clip on earrings that also had a seaside feel... 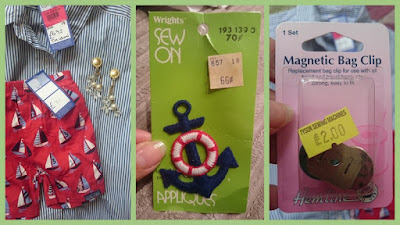 So - onto the lining!
I traced around the wicker 'basket' onto the men's stripy shirt, adding a 2" seam allowance - and an extra 5" along the base, to account for the inside 'pinch' of the base of the bag. 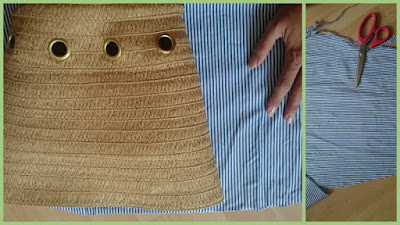 I then cut into the yacht-design children's shorts to create a simple pocket, to go on the inside of the bag for my mobile phone, and added the bias binding around the upper edge of the lining. 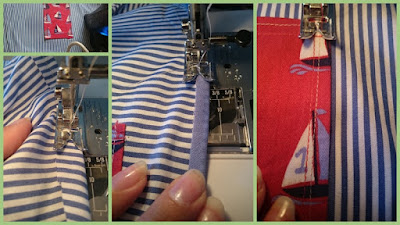 Before attaching the lining to the bag, I knew I had to fix on the straps... the straps I hadn't yet made. I followed a great video tutorial on making yarn from t-shirts, and then crocheted the yarn to make a long 'rope', ready for a pair of straps... If you don't know how to crochet, there are plenty of how to's online - this is quite a good one; and for those of you who DO know how to crochet, I used a number 10 crochet needle. (in other words, a fat one!) 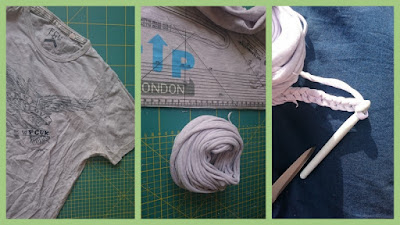 I then sewed the rope at various stages onto the inner edge of the bag, careful to match bag's existing stitch lines. 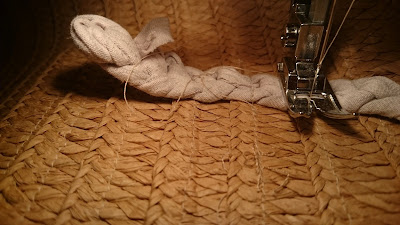 And then it was time to insert the lining! Before making the lining secure I added the magnetic clasps - which came with instructions, and were surprisingly straight-forward...
I like the way you can see through the brass rings, thankfully the shirt is exactly the same inside as outside, so you can see the Bretton stripe through the 'portals'. I also added the anchor motif to the outside, and had a play with the bag charms...
Here's a peak inside (and let's face it, one of life's pleasures is looking inside someone else's handbag!) 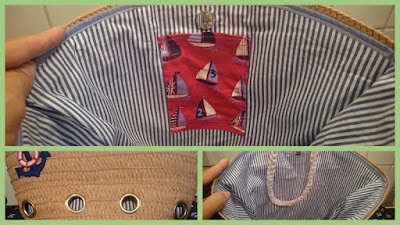 And - nearly forgot - I made a matching coin purse from the kids shorts, with stripy fabric for the lining... that took me about 20 minutes, just cutting four matching pieces of a basic purse shape, then sewing (inside out) almost all the way around - before fitting the fabric (right way around) into a clasp I bought in a craft shop in Barcelona a few years ago... As this is already quite a long post, I think I'll save the details for that remake for another day - but it was by far the easiest part of the entire refashion :) 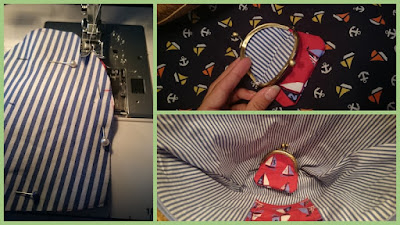 AND sew to the finished bag! 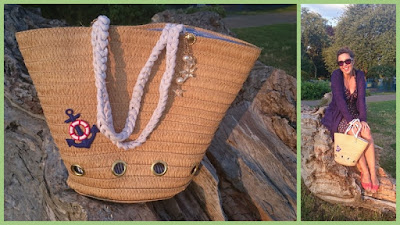 And, of-course, the all-important Before And After! 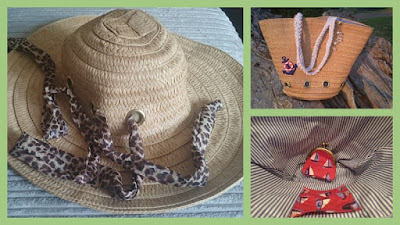 I can't wait to see what other the other refashionistas have come up with in this week of the Refashion Runway! I don't know (as I write this) if I'm still in the running - as this has to be submitted before we find out who's left the competition this week. Having said that, I'm more than happy to have made a bag I know I'll use, and I've already got ideas for next week's challenge (whether I'm in the running or not!).
*UPDATE!* I came joint 1st in last week's gingham challenge!! Can't believe it!

Thank-you for voting, if you want to place a vote in this week's challenge, please do - all the ladies bags can be found HERE! Vote before the cut off, this Friday :)

Have a fab week,
Gema x 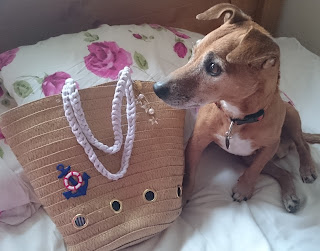