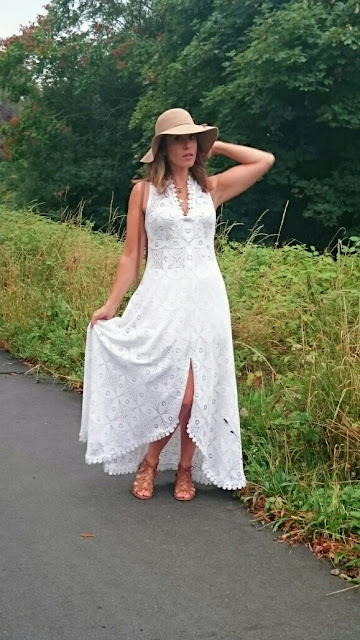 Wow... what a test... this week's maxi dress challenge was made harder by the fact I put my back out last week. I've been hobbling around, and cutting on the floor has been... hard.
Added to the fact my sewing machine's been playing silly beggars, I was close to tears at various points BUT! I've been spurred on by the fact I've felt a real sense of camaraderie with the other seamstresses, and I'm sure they've faced their own personal hurdles - and continued on to create some wonderful work.

With that in mind, I've picked my favourite Cyndi Lauper song for today's blog post soundtrack - as the material I was working with showed EVERYTHING that was underneath, showing my true colours (!) and I've always loved the emotion of the track. So... there... and onto the challenge!

I started the maxi challenge in my tried-and-tested way - setting up a Pinterest page, freeing my mind, and pinning without prejudice. In other words, I didn't let myself think "How would that work..?" or "That's too advanced for me to attempt!" - I just pinned all the designs I was drawn to; experience has taught me it's a fab way of freeing the brain up, and letting my imagination run wild. I liken it to the drama workshops I've done with teenagers. If you just ask them to be creative, they're like "Whaaat?!" - but if you play a few games first, try a bit of improv, and encourage them to 'play', everything else flows better. And so, I played that game with the refashioning part of my brain! The interesting thing that popped up was that there was a trend showing on my Pinterest page - a two-horse race, if you will. 1) African prints, and 2) white lace dresses... 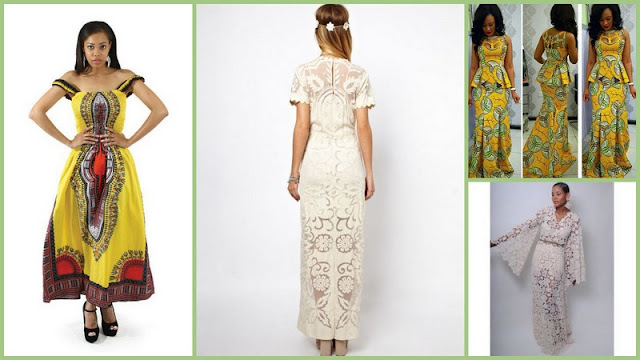 So I ran out and bought a kaftan... and then did an about turn...

Did you know, white is all the rage at the moment? The problem is I only have to look at someone else eating and I get myself dirty - so I generally steer clear of the colour. Work shirts? Give me a pattern any day! Cute little camisoles? Navy works better with the other separates in my wardrobe! And don't get me started on the issue of washing whites together - I have to wait a whole season to get enough bits together to warrant pushing a wash on. I suppose that wouldn't be the case if I wore whites more... but then I run the risk of washing a black sock by accident, and all my whites being grey from that moment on. So you can see why white doesn't feature much in my wardrobe. Having said that, the argument FOR white? It looks great with a tan - or rather, makes the wearer look even healthier. Tan/brown leather works a treat in terms of bags/shoes - and I already own that kinda thing... Turquoise is the perfect partner for accessories, and I love turquoise... And white looks so fresh on a summer's day! To get to the point, I've been umming and ahhing over white for a long time - and figured this was the PERFECT opportunity to throw myself into white, big time, in a maxed-out-maxi-way. Well, if you're gonna do it!! So the kaftan is now 'on hold' in my refashioning pile, meanwhile, the Hunt for the Big White 'Before' Garment started.

I've realised nothing in the house is safe now, following my hat-to-bag remake last week; I'm looking at everything with a beady eye, weighing up its potential for change... At the last minute, just before chopping it up, I realised making a maxi dress from an air bed (pulled out for visitors staying over night) would NOT be the best idea... I mean, I'd be OK if I went on a cruise and fell overboard - but apart from that it would likely be uncomfortable to wear. No Gema, get with the program, make something you will ACTUALLY WEAR - after all, you might not get through this round anyway, so who wants to be left with something that will go straight in the bin? (*via a short stint in the loft)

Wow - this is a long run-up, isn't it?! I think I'm overcompensating for the fact I've used something Rod loved. I mean, he'll get over it - there are lots of things in the house he loves, but this was in his bedroom... so... Sorry Rod, I'll get you another one! 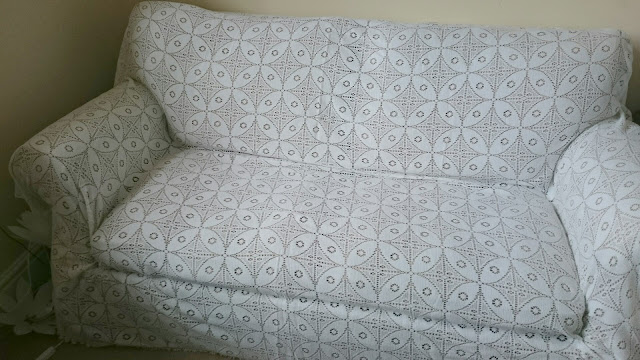 Before cutting into the throw, you can see it's made from a recurring pattern of crochet pieces. When it hangs on Dolly's shoulders, you'll see it has a trim of small crochet circles along two sides - and larger circles along the two remaining opposite sides. It's very heavy - which I like (with regards to the kaftan, that's one thing it lacked - being made from lightweight cotton, it had very little drape) - but that did mean it might pull out of shape with wear...

I was also very aware of the fact it's see through. That's the thing about lace or crochet, you have to think about what's going to happen underneath... I mean, who wants to show their underwear (or lack of) when walking in the park? Not me! 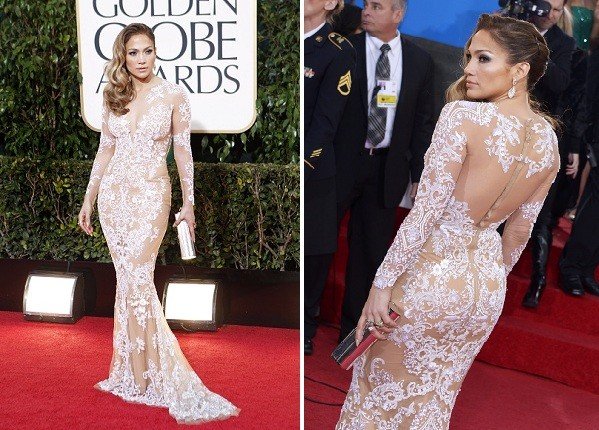 OK, some people can pull it off.

But not me! So I decided to put a nude body on Dolly whilst I worked with the crochet - I know it may seem a little strange, but it helped give me an idea of where the neckline would be, and what the finished garment would look like, as I went along.

Now if you've already checked out this week's Refashion Runway entries, you'll have seen part of my process with this project... but it was a bit back-to-front... (I only realised after sending it to Beth, and I didn't want to email her with an edit - she's got enough to do!!) SO - the main difference is that, when I decided where the armholes were going to be, and cut them out, I realised the weight of the fabric created gaping holes that were indecent! So I lifted the dress (by the scruff of it's neck!) and created a new back seam, before finishing the arm holes with bias binding... like so! 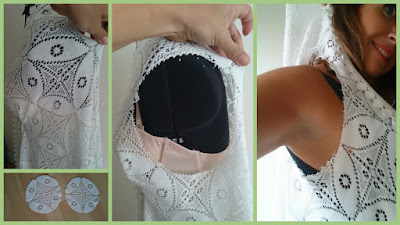 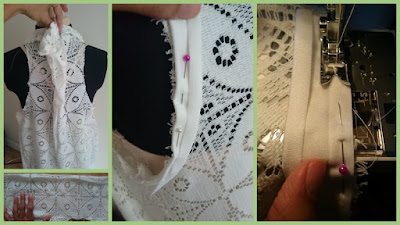 You can see it created a racer back effect, which I quite liked... but before sewing it up, I tried to make sure the back seam worked in a symmetrical-pattern-matching way. (I'll share a pic of the back at the end so you can see)
I then played around for quite a while, trying to figure out how I most preferred the dress - with the seam down the front middle, as a wrap-around effect, with the lace trim showing, or tucked in, and so on... 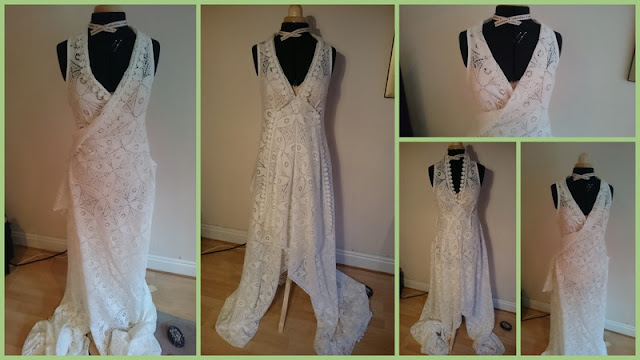 In the end I went with the centre front seam, I felt the wrap-around looked a bit dated... what do you think?

I sewed up the middle front seam, and then separated the flappy inside bits (technical jargon there), before sewing them onto the inside of the dress. Owing to that, it ended up self-lined on the front side - but I was left with the prospect of sharing far too much behind! (eventually I resigned myself to wearing a pair of shorts underneath...and very likely will again, whenever I wear this dress, otherwise I'm just asking for trouble!)

You can see from the pic above it was dragging on the floor - so I made a point of removing all the trims before deciding upon the length, chopping off, then re-attaching the larger circle trim. To sew it onto the new hem, I sewed it right sides together with a zigzag stitch, before turning 'down', and top stitching with a straight stitch to make it lie flat. 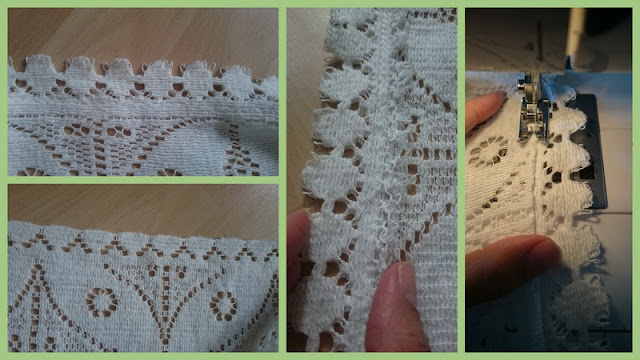 As a side note, aside from the hemline, I used French seams throughout, so that - in principle - the dress could be worn inside out, and still look neat enough to do so. I'm also fairly sure it's the only kind of seam I could use with this kind of fabric, owing to it's holiness... although if I'd had more time, maybe I could have used self-made binding for all the seams... silk binding..? Again, I'm open to ideas!!

Here are some of the details; the neckline sits high up the back of the neck, and I pinched it at the front before sewing down, to create a new shape. I've also included a pic of the pattern matching down the back seam... 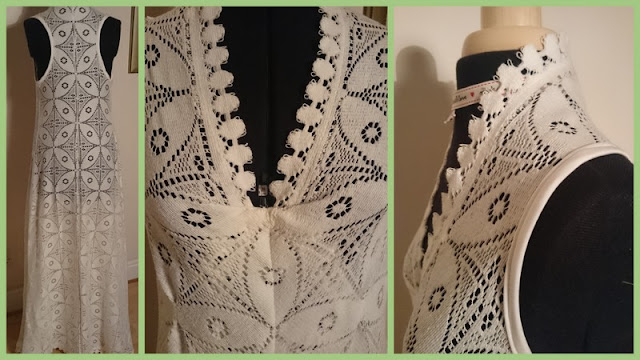 By the by, I think it turned out OK! For the 'After' pics I styled it in a 70's way, wearing a tan wide brim hat, tan leather sandals, and gold and turquoise accessories (which you can't even see!). It's a shame it was such a dull afternoon when we took the pics, but I'll be wearing it again, first sign of sunshine! :D 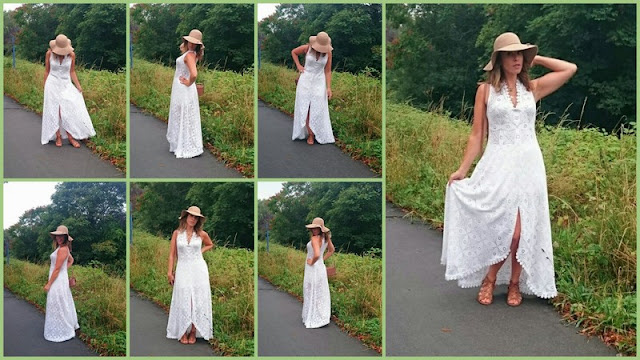 AND - can I just say, I am THRILLED to have won last week's bag refashion challenge..!! I mean, completely amazed, and surprised... and thrilled!! So thank-you, if you voted, and I hope you will again this week, for whoever you feel has made the best maxi entry :) 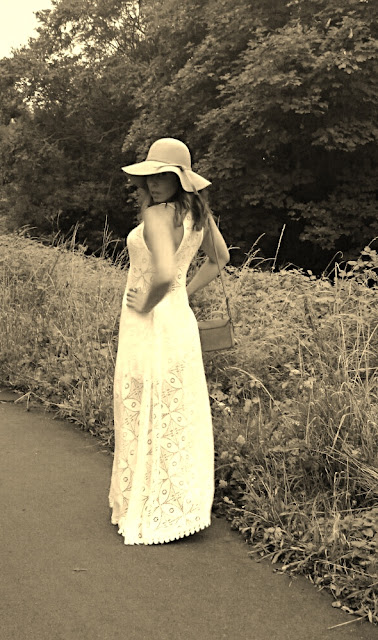 See you next week, for the Boho Chic challenge... I've been SO excited about this particular round - I've got my fingers crossed I make it through this week!! But, as you know, I'm fully aware of how talented the other ladies are - and seeing as this challenge is making me uber-productive, the prize is in the making and taking part, not in the winning. Have a fab week! 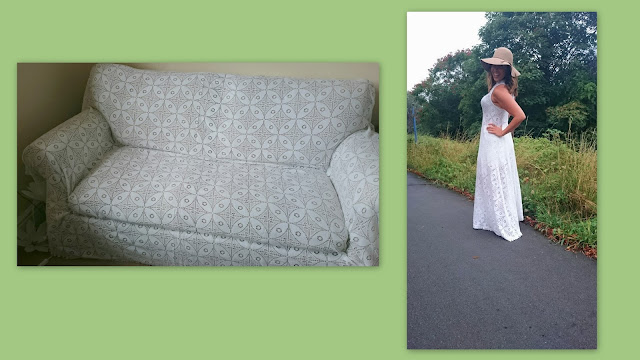