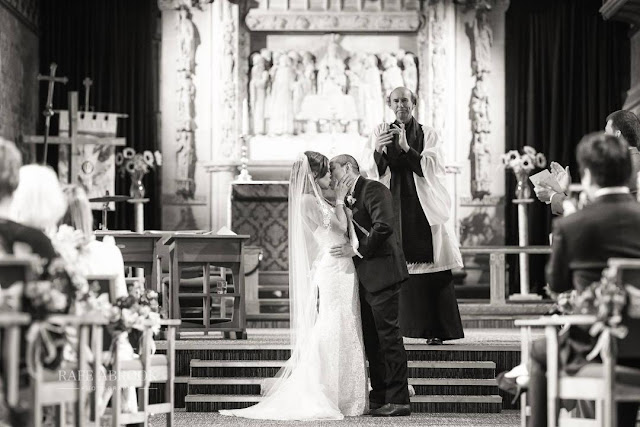 As a fond farewell to my Me-Made Wedding Series, I thought it would be fitting to post on the day of my anniversary.
We were having too much fun yesterday (!) - so here it is, one day late ;)

Obviously I love making things! I knew the wedding dress would be far too ambitious for me - but the veil? That seemed doable! ALSO: Sometimes my makes are spurred on by necessity, because I can't find what I'm looking for. Sometimes my makes are spurred on by cost, as I want something amazing, that costs a ridiculous amount. Sometimes I'm not sure what conditions the seamstresses are working in, or if I'm funding some sort of child labour. You could say this was a marriage of all those reasons...

To begin, having read a couple of How To posts on the matter, I decided I would try a few veils on, whilst choosing my dress, so I could get an idea of what worked, and what didn't, style-wise. What I'm about to say is completely personal to me - so please don't take any of this as gospel, or think I believe it's the only way to go!
Here's a visual guide I found online so you have an idea of veil lengths: 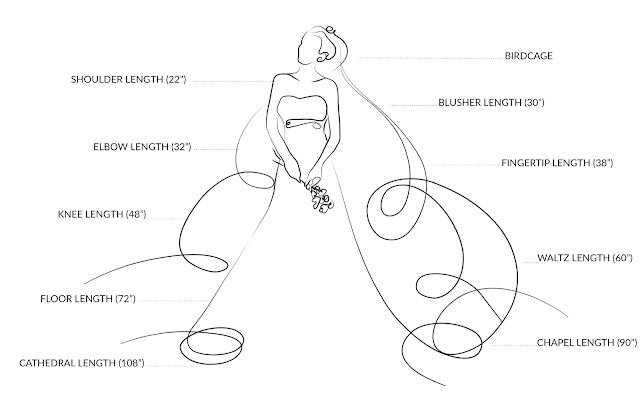 For the dress, I went with floor length with a short train, off-the-shoulder, made in guipure lace. When I tried the shorter veils on, they cut my torso in two - which I didn't think was very flattering for my figure; and also interfered with the long line of the dress, and being able to see the detail on the back. Off the back of that, I made a decision fairly quickly to make a long veil, that went past the length of the dress, called the 'chapel length'; made from just the one tier - so as not to over-complicate or obscure the back view of the dress. I also thought that, if I used a similar trim to the dress fabric, for the veil edge, the dress would be seen through a 'halo' effect of the veil.
I got a wonderful deal at my local haberdasher on the veiling (off-white, to match the colour of the dress) - £3.50/metre! AND - not only was it exactly what I was looking for, it was also incredibly wide on the bolt... 3 metres wide. I mean, I had more fabric than I knew what to do with!


From a making point of view, it was a bit tricky getting the dress out of it's cover every time Martin went out, so I could style the lace and veil, and work on it in his absence! But hey, needs must :)
Here are a few 'in progress' shots, starting with the guipure lace - which was not cheap, but beautiful: 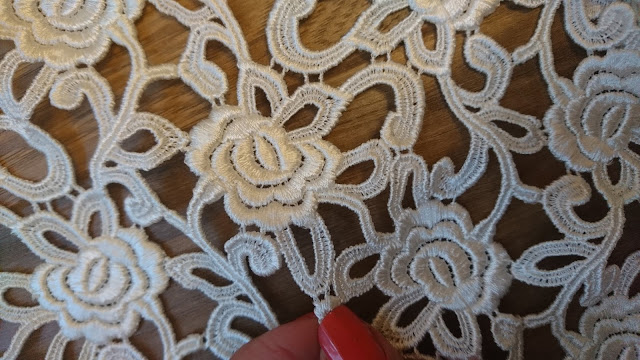 Cutting into it was a little terrifying... 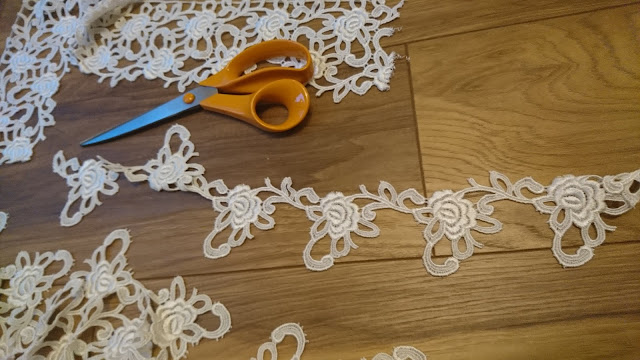 BUT - my applique scissors were a godsend,if you're considering working with lace, these are a must IMHO! 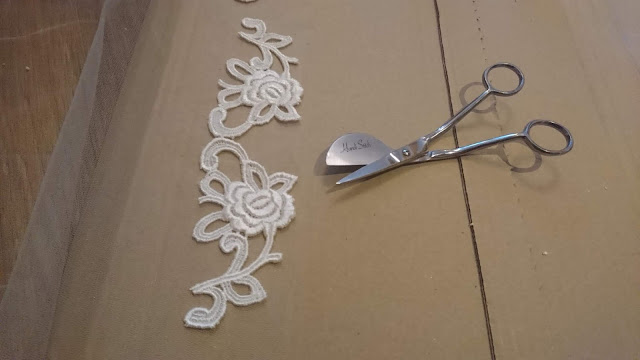 I played around with the placement of the lace trim next to the dress, at one point it looked like this; 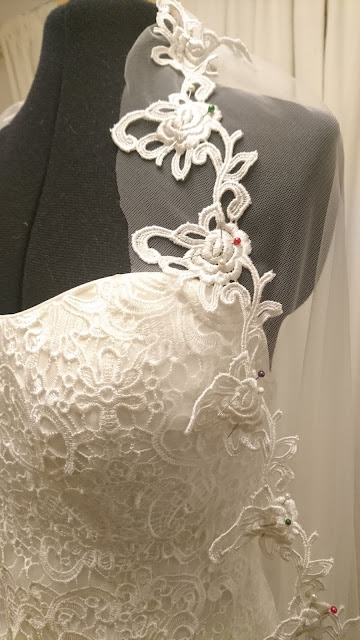 You can see how the weight of the trim created a 'drag' on the veiling, which made me rethink the full 'halo' effect I previously wanted. 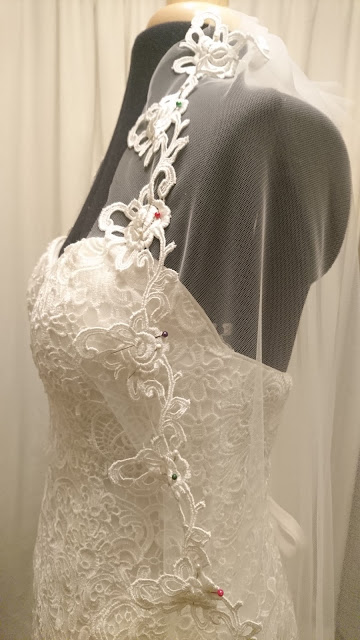 It meant that, on the train, I chopped the trim into smaller pieces, to 'lighten the load'... 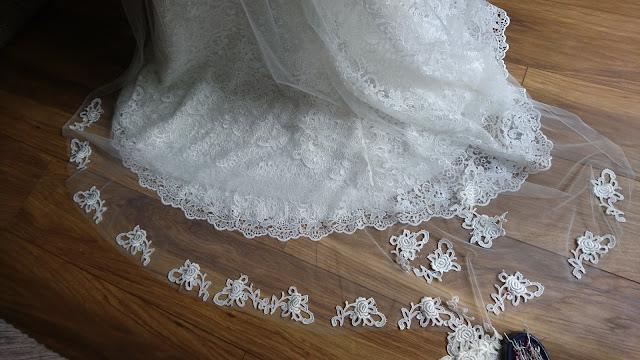 ...and then I shunted Dolly away from me, in small steps, whilst humming the entrance music (yes, go on, laugh...) - to check that the veil stayed 'splayed', and surrounding the dress hem.
(*By the way, that was the LAST thing on my mind when I did walk up the aisle, but at the time of making the veil, it seemed to be important!) 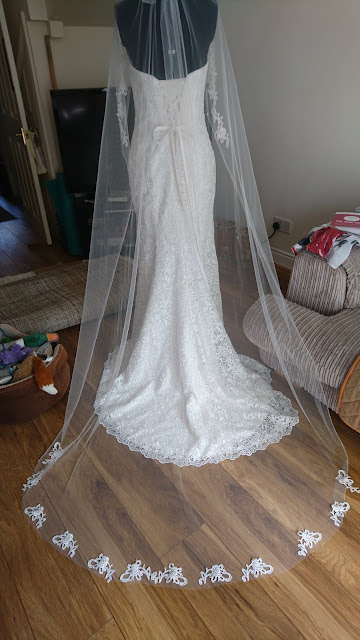 I don't have any shots of the sewing process, I was concentrating too hard (!) - but I used spray adhesive to hold the pieces in place temporarily, then hand stitched each piece onto the veiling. I then contoured/cut the veiling around the face, so that the trim was actually on the edge - and not sitting 'on' the veiling. Yes, it did take hours.

I also wanted something Spanish to use with the veil, to reflect my heritage, and decided I'd use a peineta - a wide comb normally associated with flamenco (which I love), and religious ceremonies. It can look something like this:

I wanted something similar - but not so large... Basically, something big enough to see, but not so big it would look like fancy dress! Eventually I found two that I liked online in a Spanish shop, and ordered them both - knowing it would be an easier choice to make, when I tried them on:

Which one do you think you would have chosen?

For the bit where the veil attached to the peineta, I used a running stitch, and gathered the fabric to create a little 'pouch', which sat 'sandwiched' between my hair and the comb. As I'm desperate to post this today - I will update as and when I can find the close-up pic of when the hairdresser finished, but for now you'll have to take my word for it!

As is my way, I was still finishing the veil on the morning of the wedding... but I think it was worth it, in the end.
The whole day was just perfect; such a beautiful ceremony - so personal. I certainly wasn't checking myself in the mirror every two minutes (actually, I touched up my lipstick once, all day!). I have seen plenty more perfect brides out there, who are immaculate all day - but (rightly or wrongly) it just wasn't my priority. The dancing, the food, the vibrant atmosphere... all of it was just perfect, and I will always feel blessed to have experienced such a happy day, with such beautiful people.

Three special moments to finish, then, one of me being walked up the aisle by Mum... 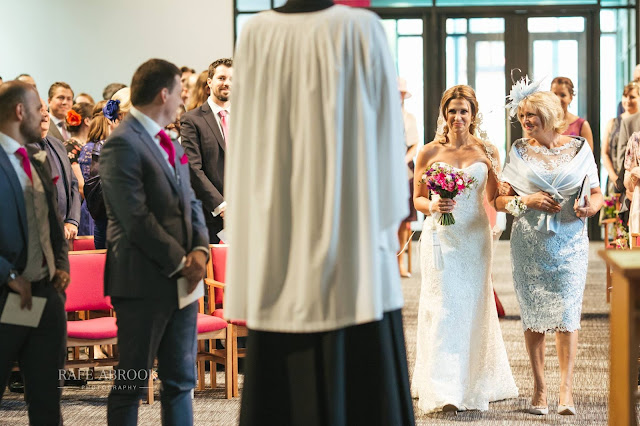 The next of me with my gorgeous bridesmaids, Petra and Rebecca... 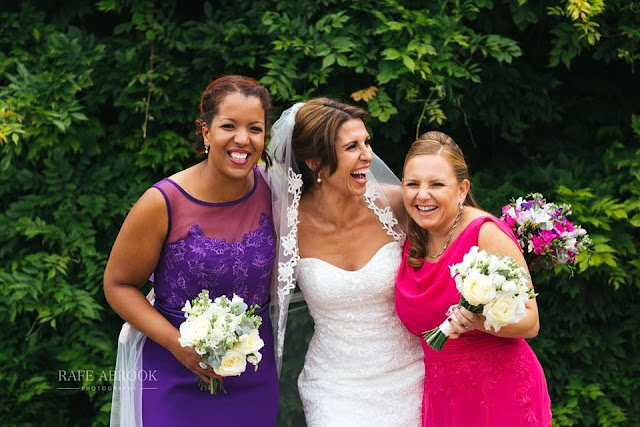 And, of course, to finish - back where we started - both this post, and our marriage, The Kiss.