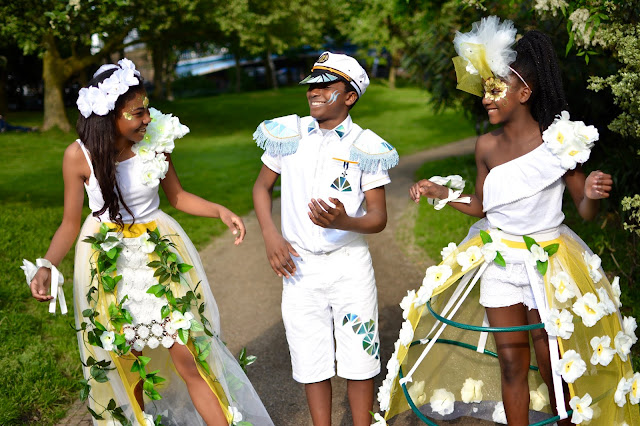 You may have noticed over the summer I was bombarding social media with photos of the Notting Hill Carnival outfits I designed and made! It was such a special experience - and I'm going to tell you why it meant so much to me, in as few words as possible!

*pics from behind the scenes* 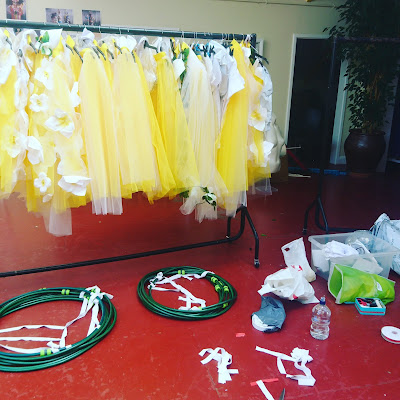 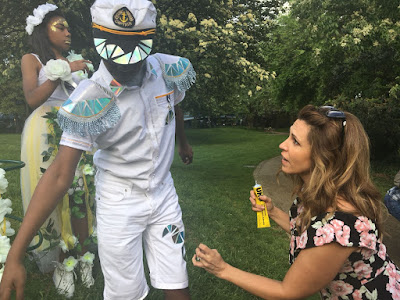 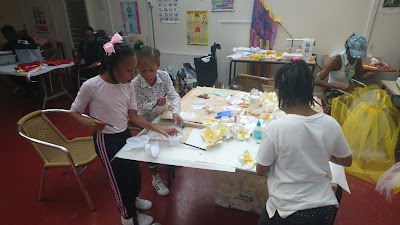 I recognise I have plenty of readers both in the US, and the UK, so please excuse the explanation, if you're already aware of what carnival is, and what it means to London....
A bit of background about Carnival itself; the Notting Hill Carnival was first held in 1966 as an offshoot of the Trinidad Carnival, celebrating Caribbean culture and traditions in London. When it was first held, around 500 people went... it's now Europe's biggest street festival!

Notting Hill Carnival attracts approx. two million people every year, over the course of two days; it's a vivid spectacle that celebrates and showcases London’s rich, varied and magnificent multicultural past and present, with a parade, fantastic live music, soca floats, steel bands and lots of delicious Caribbean food to try. Notting Hill Carnival traditionally takes place the last weekend of August, which is a Bank Holiday; Sunday is Family day - and the Monday is much more raucous, most definitely one for the adults!

But why was this year's Carnival so important? This year celebrates plenty of 'milestones', one of which formed the basis of my designs for the children; 2018 is the 70th anniversary of the HMT Empire Windrush first arriving in Britain, bringing with it 1,027 passengers, more than half that number were from Jamaica.
The former passenger liner's journey up the Thames on that misty June day is now regarded as the symbolic starting point of a wave of Caribbean migration between 1948 and 1971 known as the "Windrush generation". According to the ship's records, most of the Windrush's passengers got on in Jamaica, but others also joined the vessel in Trinidad, Tampico and Bermuda. 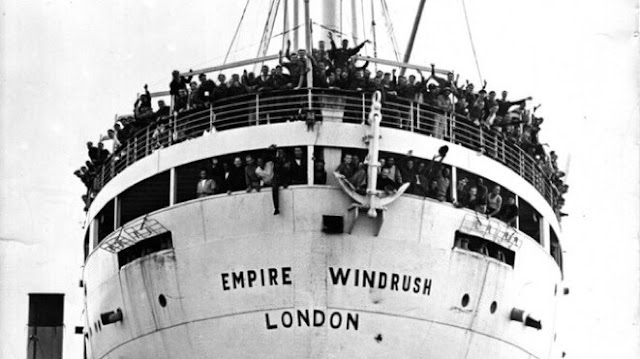 I won't give any space in this blog post to talking about the political scandal brought about by the British government this year, regarding the treatment of the Windrush Generation - aside from saying, if you want to read about it, you can, here. I am ashamed, and embarrassed by it all - as anyone would be. But rather than give it any air time here, I would rather the sentiment behind the expression 'Windrush Generation' reclaimed it's true positive meaning, as it had before politics hijacked the term.

Suffice to say, my designs were all about positivity, and the feelings that the Windrush Generation expressed on their way over here. I invite you to watch news footage from that day in 1948, of the men and women arriving at the docks, and the documentaries that have been filmed since. It's hard not to be overwhelmed by the passengers' optimism, for starting a new life in the 'mother country'. These are the emotions that drove my work, and later came to be the names of each design; Hope, Joy, and Honour. The collection was titled 'Spirit of the Windrush'.

Aside from the big changes happening in this country at that time socially, from a fashion point of view, we're also talking about the late forties, shortly after Dior released his 'New Look' design. I wanted to have an element of that in the girls' outfits; with a nipped in waist, and the full skirt hitting mid-calf, a very feminine look. Originally I wanted three hoops in each skirt - here's one of my crude sketches from the beginning, when I was trying to work out how much material I'd need, to make for 30-odd children... 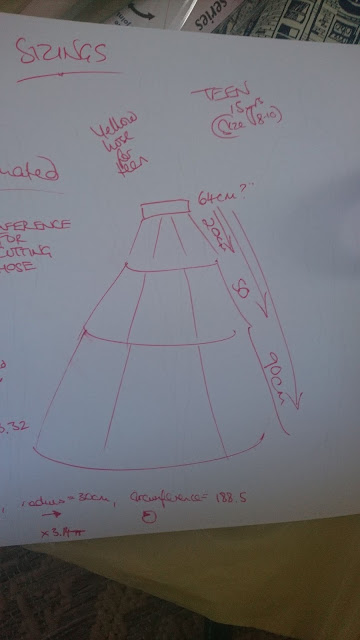 I considered making a documentary (a loose term, more like, videoing bits as and when they came up along the way!) - but it proved to be impractical. It was such a busy time, that filming, editing, and planning anything like that, just went by the wayside. Having said that, I do think there is a lot to be said about the designing & making process, which I might try to fit in at some later date. If not, I'll definitely write something about making outfits for Carnival, and the stages a designer goes through, in a bit more detail. It was definitely a process, going back and forth between fittings, and working to a budget.

To work that info into this post would take forever, so I'd rather cut straight to the pics of my outfits - and just focus on a few creative points for now!! Starting with Honour, the boy's outfit.
I boiled, and then cut up, DVDs to use on the epaulettes, and shorts. 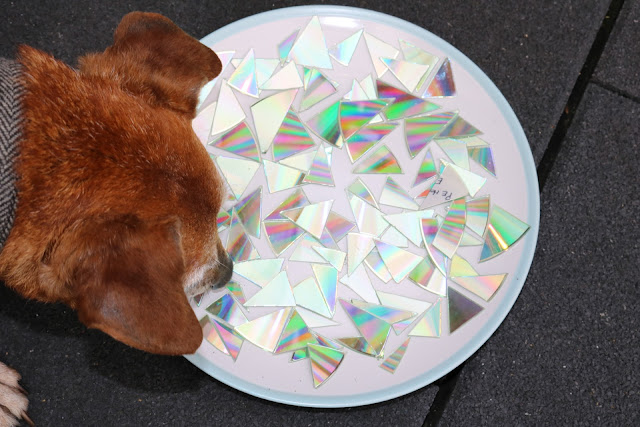 I used curtain trim, sewn onto shoulder pads, attached to the shirts using velcro (so that the shirts could be cleaned between carnivals!). 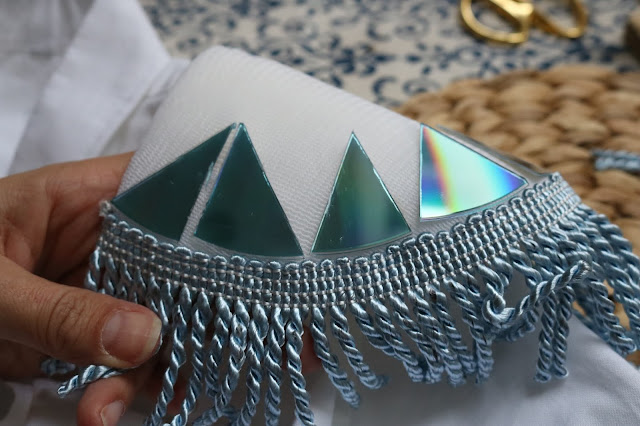 These mirrored elements reflected the idea of water, and - when I first set out on this journey - I was hoping to make most of the outfits from 'green' recycled materials. 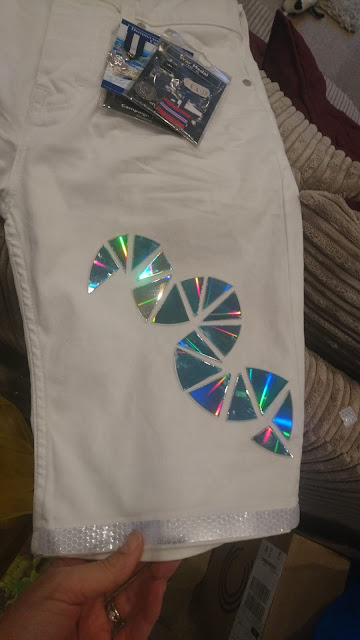 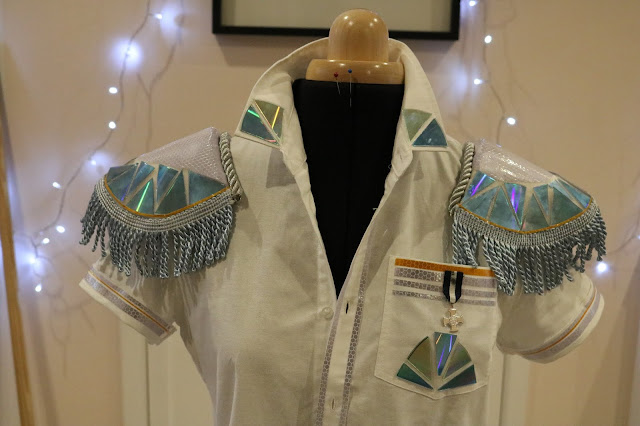 I think Dylan cuts a FINE figure in his outfit, I even managed to find a replica medal for his shirt pocket - the kind that would have been awarded to the a serving officer from the Windrush Generation for their service during World War II. 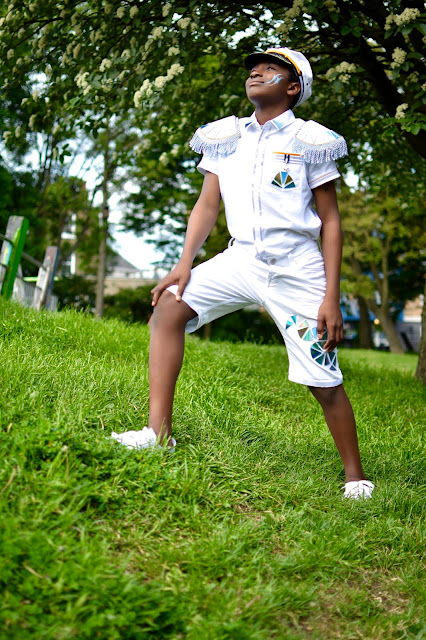 Whilst the boy's outfit centred around the water/military aspect, the girls' design was all about the Windrush rose.
I used garden hose for the structure and 'boning' of the girls' skirts - the idea was that this would be more robust than actual boning (which can be prone to snapping) - and also stand up to the boisterous nature of the day! Hope was the original girls' version, modelled by the gorgeous Aliya; 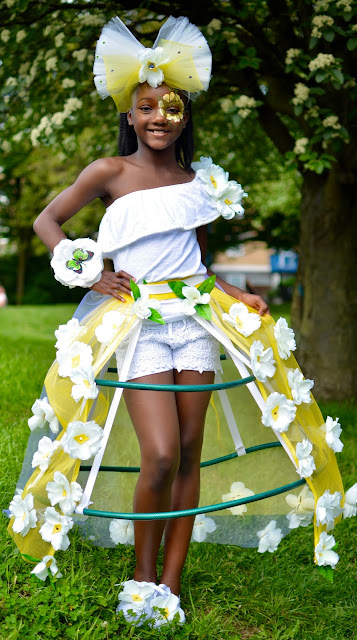 Another part of the design that changed as time went on, was that the roses got bigger... For the prototype (in the picture above) I used pre-made flowers, the kind you find on a garland, attached to a leafy vine. These are a) very expensive when you're considering using them in bulk and b) set in size, and hard to find in a LARGE dramatic size (which is what I was going for). In the end, I created a template, in two sizes, which we cut from white satin, then glued and pinched together, spray painted yellow in the middle, and then painted with glue around the edges, before dipping into glitter. 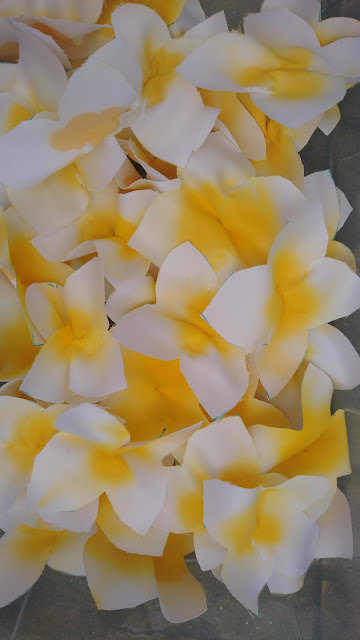 At this point, you might be thinking "who is this 'we'?!"
In the next photo, not only can you see all the children, you can also see some of the ladies who helped massively along the way, at Mas Camp. This is part and parcel of the carnival experience, where makers spend hours together, getting everything ready on the run up to the big day. A special shout out to Shondal, Sophie, Candy, Uril, and also Mags (not in the pic), my special seamstress friend, who really helped out in the final week! 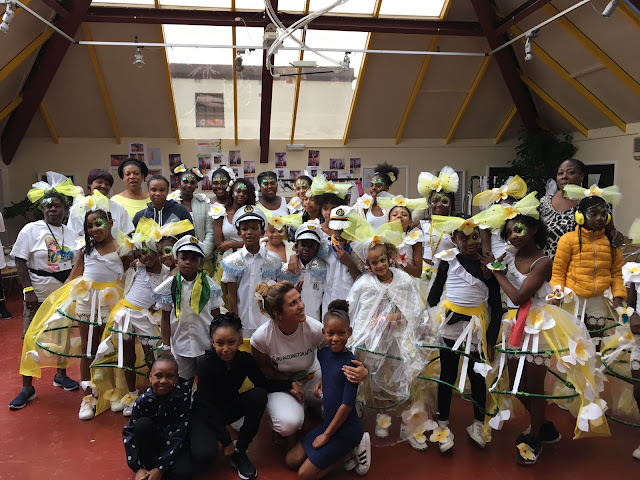 Unfortunately we had heavy rain on the day of Notting Hill Carnival - you can see in the group pic some of them were preparing themselves for the worst of it, in plastic macs and puffa jackets! (*I did not make any of those!)
BUT, the following Sunday, the kids got the chance to play again at Kingston Carnival - it was a beautifully sunny day, just perfect for showing off the vibrant outfits, in the way I had originally hoped... 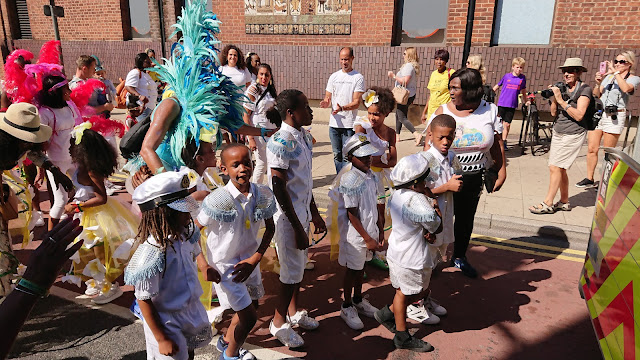 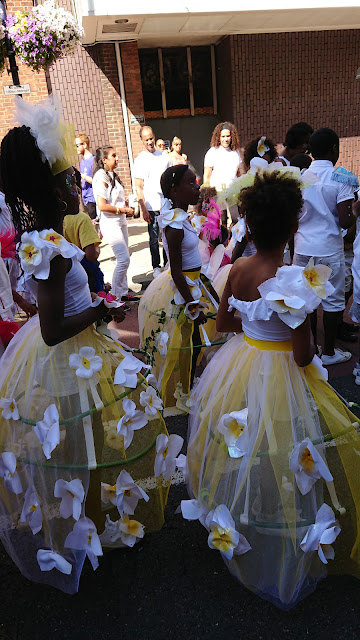 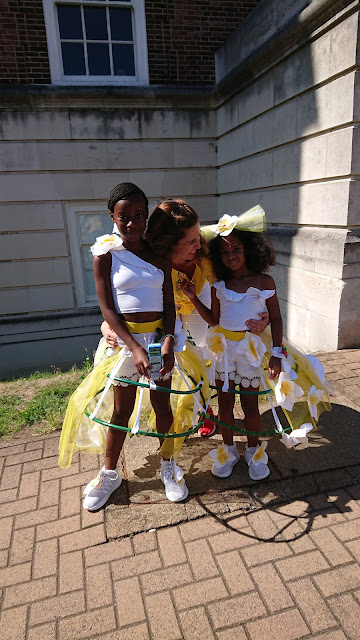 I know this post is rather thin-on-the-ground in terms of technical detail, but in the interests of keeping it relatively short, this is more about expressing my gratitude and joy! I'm so pleased Elimu took a chance on me, a complete newbie to Carnival! Thanks to everyone who helped me along the way; Symone, Eldora, Lorna, Tony, Leah, Lee, Ansel, Graeme, and my patient husband Martin!