Sequins and Slippers - The Show!

You may recall, back in April I filmed the first of my crafty ideas in a shoot, which paved the way for this very Blog!

And you know one of the reasons I'm so glad this is ready to share with you now..? Because I believe bunting is a summery celebration! So what better month to share a 'How To' on making some of your own..?!

Also - you now get to meet Rod..! This is his first real starring role in anything, so please be kind (if you're thinking of commenting), and let me know if the final scene makes you laugh the same way it makes me laugh every time I watch it (yes, I am that sad!).

I suppose the first thing to state, which is a little obvious, is that bunting can be as different as you want it to be... You can use paper, cardboard, felt, plastic sheeting - even crocheted wool (!); this is just the version I've chosen to demonstrate. And, much in the same way the materials can differ, so too can the shape and size - you could make it with square flags, tin foil stars - hell! Anything goes! Again, I've gone down the 'traditional' route - but you can really make it your own; 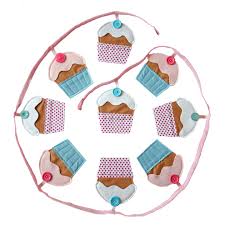 To explain how I came to be counting flags in the video; it's just ONE way of deciding how long the bunting will be, and to work out how much material you'll need.... Last year I made bunting for a friend's wedding; the couple bought their fabric, and I kept on making flags til there was none left... I think there was about 33metres in the end...

Sew, how much fabric do I need?

How long's a piece of string?! You could work with as little as a metre of two different contrasting fabrics to start with, then play it by ear and buy more if need be - again, I'll just reiterate the proportions for the bunting on the video, just in case you find the dialogue version too fast to make a note of!

Imagine the flags are 20 cm in width, and based on the fact you'd make one flag for every letter of 'congratulations!' (for example) it'd need 16 flags (including the exclamation mark) then two flags either side of the word, just to add some length... that makes 20 flags in total. Lost yet? Good! Don't forget to add gaps between flags and at either end, for the purposes of this 'assignment' let's say they're 5cm each...

You'll notice I'm not talking about the length, just the width, of the flags; I think it's a matter of taste whether you like the 'boxy' triangle or the slimline triangle, again it'll be a case of trial and error :)

I won't go through every stage, as I think it's quite self explanatory - but you may be wondering why there are still pins in the flags after I've sewn them together (at 2mins 52secs on video); obviously some people would removed them as they sew... and I would too, normally, this is one of those anomalies that comes with filming something you normally do without thinking..! :)

As the next few episodes come out, you'll see they follow a bit of a 'format', and you'll get to know Rod more as each one comes... I thought I'd give a bit of background info as to what went in to the making of these short videos...

It was a real eye opener when I started prepping for this shoot. Mostly, as a presenter I turn up to a studio or location and either read from autocue or present live; but either way the prep is mostly done by the producer and/or director. On this occasion, I had to foresee the various stages the bunting would 'zip' to, so as not to state the obvious and be seen 'real time' sewing through every stage. Again, I don't normally have an iron hot and ready for action at my feet, but these are things that you get to thinking about when prepping a crafty shoot; what will be needed, where, and when.

The shoot is filmed in my lounge mostly, although I don't a) talk to myself or b) face towards the wall to sew... this is much how it looks normally... It's shot on two cameras, one set for the wide shot, the other handheld for close-ups, which is what gives it that 'natural' feel. It didn't feel particularly natural lighting-wise, as there were (what I call) flood lights in the lounge, giving an amazing brightness and edge to everything. I think it's details like this that make it look different from other filmed-at-home Youtube videos - it'd be interesting to hear whether or not you notice, or if it all looks much the same as what you're used to... I'm really chuffed at how Plus 44 Films brought my ideas to life!

I'm looking forward to sharing more of these short videos with you SOON..! And in the meantime I'll be cracking on with my Summer Challenge!