This past week has seen me travelling up north to spend some quality time with Mum and Nan, complete the first in a series of hair & make-up trials for a budding bride before her ceremony in November, fit in a hen do in Basingstoke (different 'budding bride'), and also manage to do a couple of on air shifts... so I think one of my favourite Bangles tracks is the perfect blogpost soundtrack for today, even though today has actually been quite laid-back in comparison... I think it's called poetic license... or bloggy license..!

Before the madness began, I had the pleasure of going to Foodies Festival, Feast, in Battersea Park last weekend; 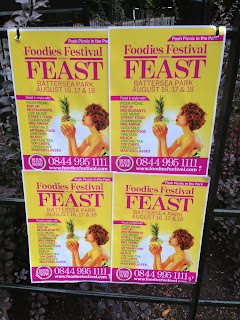 if you've not heard of it before - it's the perfect place to go if you are a food lover... it's as simple and as complicated as that! Even though most of the event was staged outdoors, the rain did little to dampen the atmosphere or put people off attending...

With everything from street food to new kitchen gadgets, pop-up bars and a rotation of well-known chefs and presenters giving talks in varying-sized tents and on different stages, it really did offer so much... to so many! I got the strange feeling I was the last to know about this party... even though it's been going for years, it's the first time it's been staged in Battersea Park; and the crowds were impressive...

Described by the organisers as an 'exclusive picnic extravaganza', I thought I'd share a few pics and thoughts from the day with you...


Places to sit and indulge included deckchairs positioned in front of a stage hosting live music acts, a bus which had been reinvented internally into a 'caff', a vintage tea pagoda (which obviously caught my eye with the bunting...), and benches facing a chefs arena - which invariably ended up in a scrum as people ran to get their share of the freshly prepared fayre. It did make me think, you'd have to be quite brave to be a chef at this event, making a recipe in front of a hungry audience, with all of them sitting on the edge of their seats, poised and ready to make a dash to get their share. Scary... 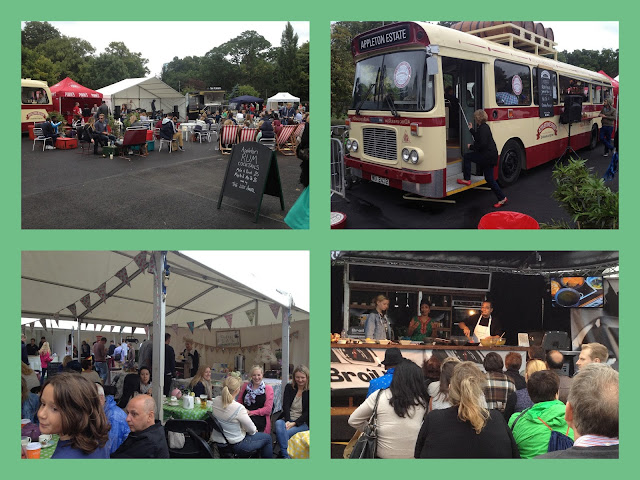 I'm also a closet honey fan. There I said it. OK, so it's not very rock 'n' roll, but I have been known to carry around a small pot around in my handbag, just in case I grab an afternoon coffee... And yes, I have had accidents and had to peel my tissues and chewing gum out of a sticky mess in the bag's lining...
I won't bore you with the details as to why I'm not really a sugar fan, it'll very likely make you regard me as a conspiracy theorist (!) - but I'm finding that, with age, I'm becoming ever more particular about what I eat, what I drink, and even what I sweeten my drinks with, and honey seems to fit the bill for me. Having said that, any old honey won't do any more... I was first introduced to raw honey by my friend at Bareskin Beauty (another blog may well follow at a later date about Juliette) - so I found I had much to talk about with the guys who are passionate about their honey, on their Bee Mercy stall. 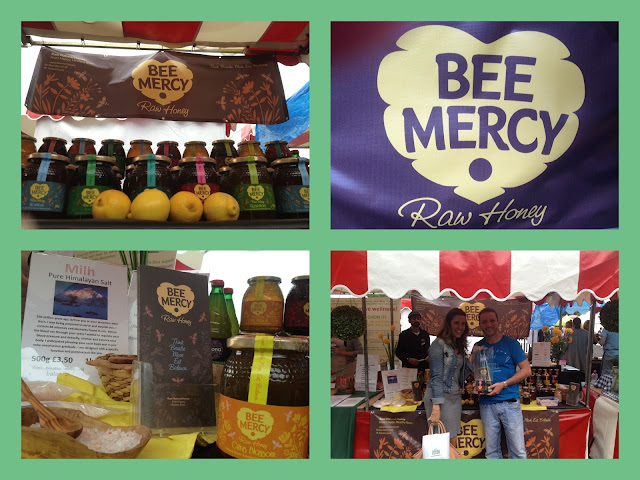 If you get chance to try their raw honey, do. As I say on my 'About Me' page, I'm not being paid to promote anything on this blog - so I say what I mean - and this is really beautiful honey. Not only that, the guys behind Bee Mercy are lovely too - and have a riveting story to tell about why they came to be in the raw honey business... If you ever get the chance to meet them, ask them about their journey; they'll be happy to share not only insights but also a sweet sample..!

It also dawned on me, that day, that my 'people watching hobby' has developed into a more specific passion...

...for avidly checking out people's clothes and style... I found myself approaching a stranger to ask if I could take her photo, I must have seemed a little nutty... but thankfully she said yes! 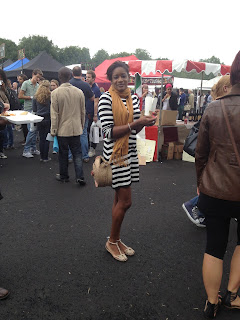 The avid blog readers amongst you will remember my refashioning from only a couple of weeks ago - and maybe you'll understand why I was drawn to this lady's dress!! It really did spark a few ideas in my head - given that I was so obsessed with lining up the stripes in my creation; here was a completely different way of wearing the same print... The unexpected and lovely surprise to come out of THIS conversation is that the lady is a fellow seamstress! AND she loves refashioning... her name is Ghislaine, she's French, and she's the proud owner of a new sewing machine..! I don't know if it's serendipity, or her stylish outfit that gave the game away, but finding a fellow refashioner in that enormous event is comparable to finding a needle... ah you know the rest! ;) Another post will follow regarding Ghislaine, as she's shared many unique ideas with me since our meeting, via e-mail, which I will be passing on to you... Isn't life funny?

A final note on Feast then...

Sometimes London can feel a little bit kid-unfriendly, so it was good to see that, not only were children welcome, the child in every one of us was encouraged to come out and play! With a sand pit, tasty sweet samples dotted around the place, and even a children's cookery theatre... I made a promise that, not only would I return to another Foodies Festival, next time I'll arrive earlier and take a big crowd along! 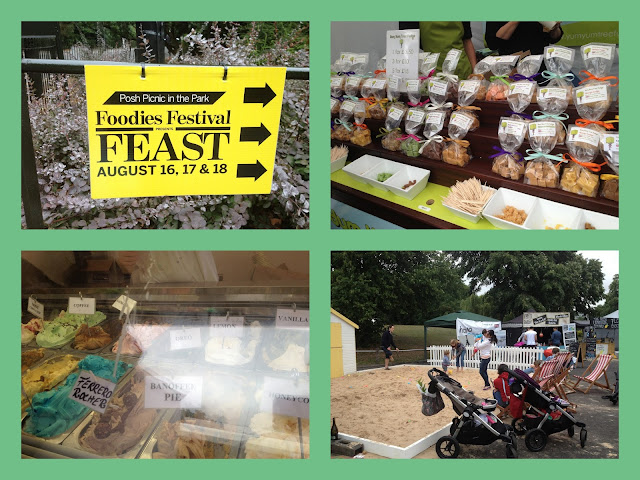