Some people are not as lucky as I am, to have my Mum with me to spoil this weekend... Although I hope I make my Mum feel special all year round (and not just on Mother's Day) - today is an obvious opportunity to celebrate what I have...

If you have a closeness with your Mum, that's anything like the friendship I have with mine, then you'll know how lucky we are to have such a bond, and I don't want to take that for granted... SEW! Here's the blog post soundtrack for today...

Seeing as I've spent nearly a year writing about things I've made for dogs... babies... weddings... and myself... I decided Mother's Day deserved a special 'making session' for Mum. But what to make?

On an occasion like this, I like to cater for all the things that Mum is, so normally I try to get something for the glamorous side of her, the home maker, the actress, the avid reader, and many more other things besides. Recently Mum's started a small dog walking business in her area, which has developed into boarding too, so I thought I'd make her something with dog print in the fabric... She also works very hard, taking care of Nan who's now in her nineties. At a time when Mum should be relaxing and enjoying her retirement, she is, in fact, working harder than ever to provide care, food, and entertainment for Nan. I find myself telling her to take care of herself, find time for herself, and be good to herself... SEW! What better way of getting someone to relax, than making some gorgeous cushions to gaze at? Sneaky, eh?! (*If only it were that simple! But the intention's there...) 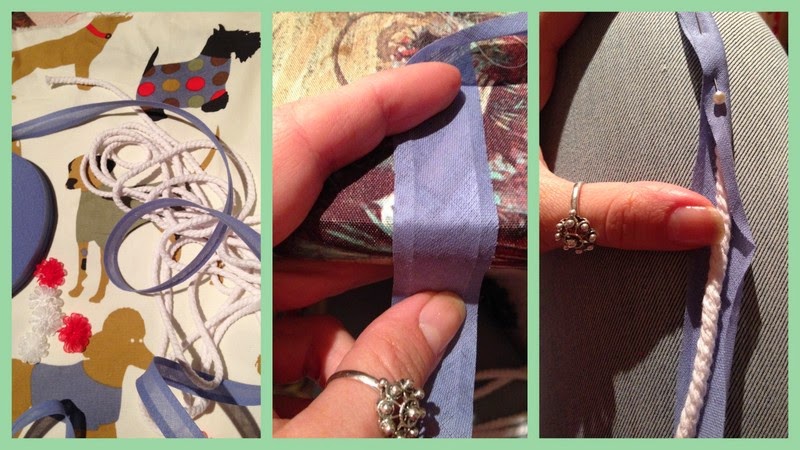 I started by scouring the internet for a good tutorial on making piping. As you know, I went on a cushion making course, and although I enjoyed it, there wasn't time within that session to cover how to make button holes, or piping... and this was something I wanted to do on this particular gift. I bought my upholstery fabric, and then went on to buy bias binding, choosing a colour from the main fabric. Here's the blog post I used as a guideline to making piping - great, eh? I won't repeat anything from that post, just to say it's got some great tips (like not including a seam allowance!). In fact, take a look around the rest of the blog, Is That Homemade, it's got some great step-by-step posts, inspired by the Great British Sewing Bee... perfect!

For the button holes, I followed my sewing machine's instruction manual, To-The-Letter. I'm quite impressed I didn't rip or break anything... AND they look clean and professional! So instruction manuals sometimes DO come in useful... who knew... 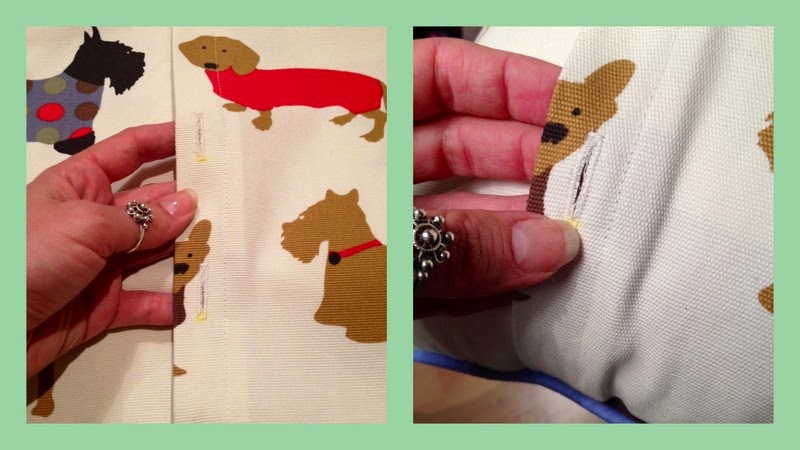 I tinkered with a few design ideas, mainly to do with sequins and leather appliqué (for the dog collars) - but in the end I left it as was, with the print speaking for itself, the blue piping accentuating out the blue dog coat, and the red buttons making the sausage dog pop! I really hope Mum likes them... (but I've got lots of other presies, just in case they're a disappointment, ha ha!)

A quick reminder, just in case it needs saying, WASH the fabric you're about to work with BEFORE ironing, cutting and sewing... especially if there's cotton in the mix... Why? Well, if you do, you're safe in the knowledge they can be laundered, without fear of shrinkage, after the fact. Let's say there's a doggie accident.. Or a spillage. Let's say you've just made yourself a hot chocolate, after a long sewing session, and you forget they're right in front of you, the cup goes flying, the drink goes all over the cushions, then you're terrified they won't be washed and dried before you get on the train back to Liverpool to give them to your Mum. I mean, let's say that happened. What then? If you didn't wash the fabric BEFORE, then you'd be in trouble... but as I did, it was OK. Not that I did, of-course...


I'm now writing this, having presented Mum with the cushions, and she loves them! Yeay! In fact, she said she'd like to take them everywhere with her, as if they're her pets.
Unexpected... :)
Labels: button holes cushion DIY How To makings Mothers Day piping