Designing Costume for Stage and Screen, A Review 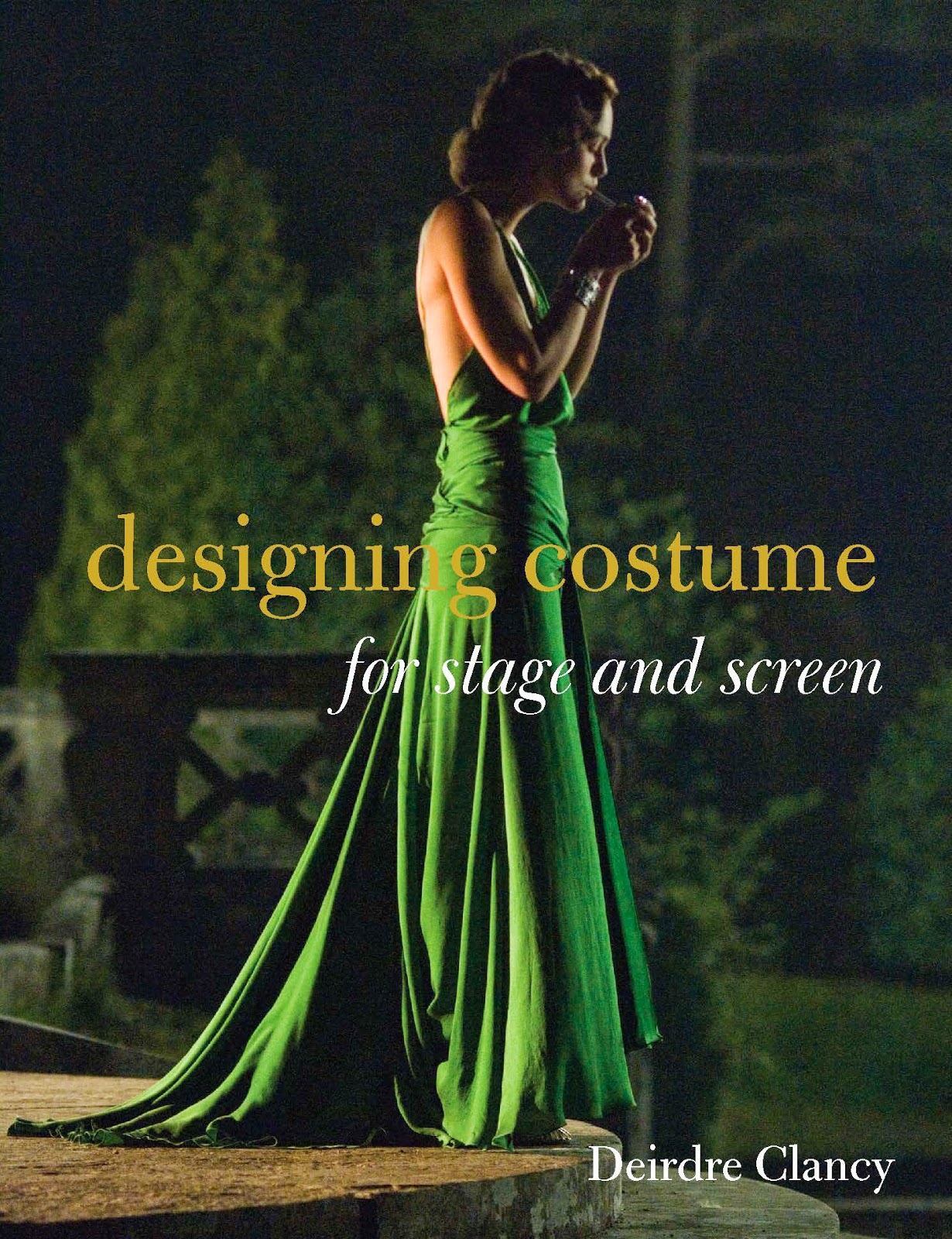 So, here it is, the book review I've been wanting to share with you for the past month! When the publisher contacted me, to see if I'd be interested in writing a review, I jumped at the chance. Why..?

Let me give you a bit of my background, I grew up in the theatre... I don't mean I had a bunk bed in the green room, I mean my mother is an actress. (I would say 'was', as she's not been in a show for a while, but being an actress is a lifestyle choice - it's who you are... again, maybe that's the subject of another post?). SO! I have lots of memories of sitting in the dressing room as a little girl, watching her apply her make-up, roll up her stockings, telling jokes to the rest of the cast, and generally loving the life of the performer. It wasn't her main job, but it was definitely her passion. I was also in musicals as a child, but for some reason I have more vivid memories of her in shows, than of me in my own... She is most definitely a comedy actress, but she's also a singer, and played the part of Velma in Chicago (later to be known as her magnus opus)... But there is another side to Mum's relationship with the theatre, and that's when she was the wardrobe mistress in shows that I was in. Coupled with the fact I have a strong interest in costume design, (I may have mentioned that before!), now you know why I was so interested in reading this book... and sharing it's contents with you!

I had a preconceived idea of what the book would be, given it's title, 'Designing Costume for Stage and Screen', which isn't how it actually turned out to be... but that's not to say I'm disappointed! I thought it was going to be a book full of instructions on 'How To Make'... I had visions of creating a show stopping wardrobe, heading into Soho in a bejewelled number, sipping cocktails in a members' bar with people whispering "Who IS that? And where DID she get that theatrical piece she's wearing??". The book is, in truth, a beautiful reference book, focusing on the history and practise of costume design, drawing heavily on the experiences of it's author, award winning costume designer, Deirdre Clancy.

Starting as far back as 1600BC, Deirdre provides a whistle stop tour of the main events and developments in theatre, and the ramifications for costume design, right through to present day. The second chapter concentrating on 'The design process' is more about the practicalities of design, in other words, how to approach the craft from a business point of view (including ways to go about discussing your ideas with the director). There is a small section on figure drawing, and the use of photoshop, but in the main the author assumes the reader already has a strong knowledge base regarding the design and construction of a garment.

The third chapter, entitled 'The world of costume' provides an extensive overview of all the different genres of production the author has worked on - and offers some incredible career advice to the aspiring costume designer, fresh out of college. It reads like a practical guide, anecdotal and sincere, as Deirdre shares the highs and lows of pursuing a career in costume design. The next chapter, 'Practical period costume' discusses the practicalities of creating costumes to represent any given decade, and starts with;


I am not a costume maker or pattern cutter, so you will need to seek out specialist courses, books and websites to take your knowledge of these crafts to a higher level. Think of this as a gateway book, which will give you ideas and a language that will both inspire you and help you to ask the right questions so that you can, if needed, research more deeply.

- and it's THIS sentiment that I feel could be made clearer on the back cover... 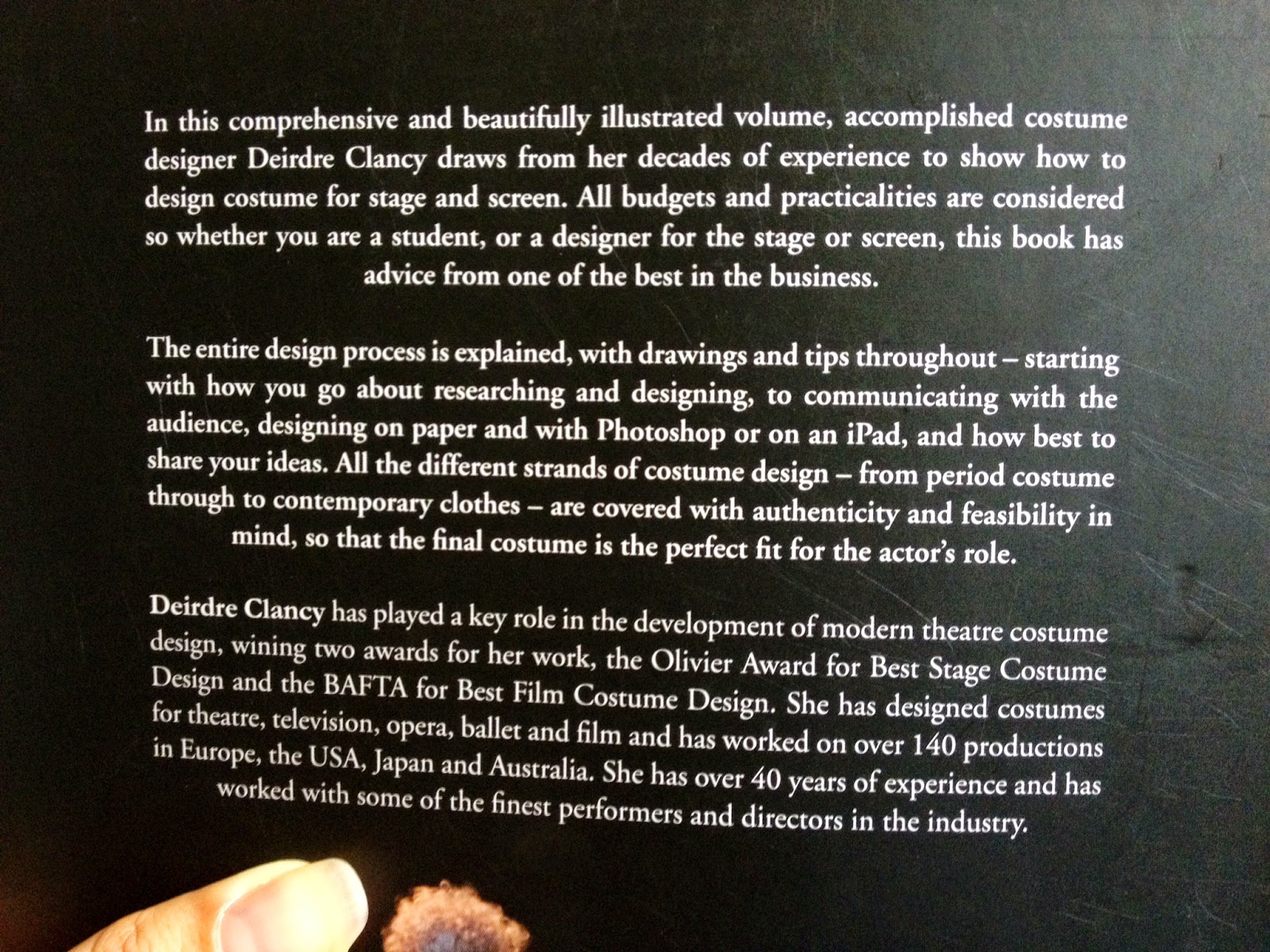 Instead, the reader could be forgiven for thinking we are about to read a practical guide on how to design and make costumes, which on the whole, is not the case. I also feel that the book flits back and forth through history, on more than one occasion, in a way that could make it hard to find something you want to relocate, after the fact.
They are my only criticisms.
It's definitely an insightful read, with authentic narrative and personal experiences thrown in - along with plenty of reference material from other writers and publications that the reader may find useful. The book concludes with three case studies, Amadeus, A Midsummer Night's Dream, and Simon Boccanegra - as Deirdre explains how each production developed, from a costume design perspective, from concept, right through to the day of performance.

If you are interested in learning about what it means to be a costume designer, what you could expect from the job, and what it would require of you (in terms of your personality as much as your skill set) - then you'll find this a fascinating read. And please share your thoughts on the book, as and when you read it - I believe it's important to support writers wherever possible, especially when it comes to the arts.


*Disclaimer; I was given the book to review, and have not been paid to do so.


Have a wonderful week!